Again the US is denying science and the changes in social understandings.   Germany and other advanced countries have implemented the easy changing of identification documents to match the gender identity of the person.    The discrimination in this story must be fought back against.   This is the same discrimination faced by gay people years ago that is coming back today.   I just posted about schools trying to deny that trans people exist and students must be dead named and the wrong pronoun used.   What disrespect and how insulting.   Think if people insisted on using the wrong name for you or calling you the wrong pronoun!   Don’t want to serve a gay person or do a service for them, make them go elsewhere even if there are limited places they can get that service.   What if the same was done to Christians?   Substitute black for gay or trans with the same denial and see if you still accept the discrimination?    The reality is that trans people exist and are not a medical problem to be fixed.   They deserve to be able to live without being discriminated against.   First they attack the trans people, then they go after the rest of the LGBTQ+.    Hugs 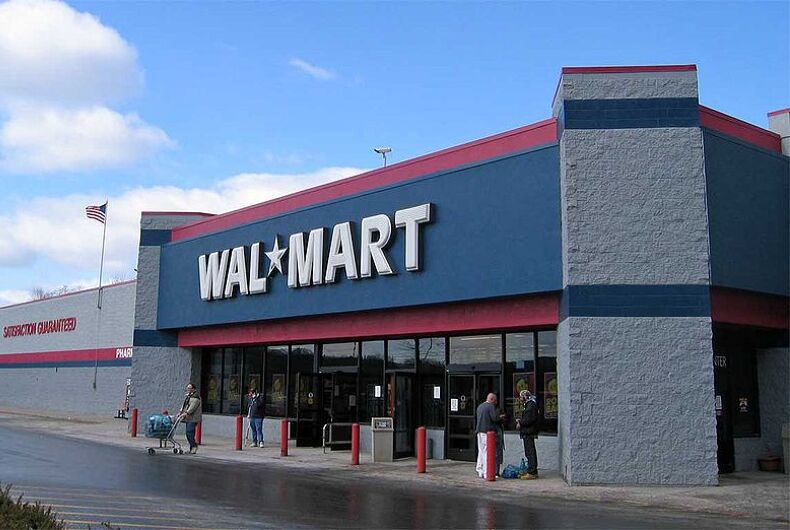 A transgender man has filed a complaint with the Illinois Human Rights Department after he was denied service at two separate Walmart stores.

Skyler Hyatt says that employees at stores in Lawrenceville and Olney, Illinois would not allow him to cash a money order because his driver’s license still lists his deadname. At the time, his license did list his gender as male and had a current photo, but Hyatt says he has been unable to afford the process of legally changing his name under state law, according to The Hill.

According to the complaint, a supervisor at one store “made a face of disgust” when presented with Hyatt’s ID. An employee at another store told Hyatt that his money order had been “red flagged.”

“What should have been a simple transaction turned into an embarrassing and painful experience,” Hyatt said in a statement released by the American Civil Liberties Union of Illinois. “Transgender people like me exist in every corner of Illinois. And many of us depend on services from stores like Walmart to navigate life without outing ourselves at every turn.”

“As a corporation that claims to support LGBTQ rights across the country, my hope is that Walmart can make sure that no other transgender person experiences this discrimination again,” Hyatt said.

A spokesperson for Walmart told The Hill that the company is taking Hyatt’s complaint “seriously,” adding that the retailer does not “tolerate discrimination of any kind.”

But Walmart has been hit with multiple lawsuits from former transgender employees in recent years. A former employee sued the company in December for failing to do anything about managers and co-workers who repeatedly used her deadname.

In 2017, the retail giant lost a federal Equal Employment Opportunity Commission (EEOC) case when the board ruled that they had discriminated and harassed a transgender woman at a Sam’s Club subsidiary in Florida.

That same year, another transgender woman won her case before the EEOC.

Walmart later settled with a lawsuit brought by Charlene Bost, who alleged she was harassed by coworkers at a Sam’s Club in North Carolina, treated differently, unfairly disciplined, and ultimately fired after she came out as trans.