The fascist maga brownshirt thugs of the right have long targeting the LGBTQ+ and other minorities they can make the boogeyman.    Hugs 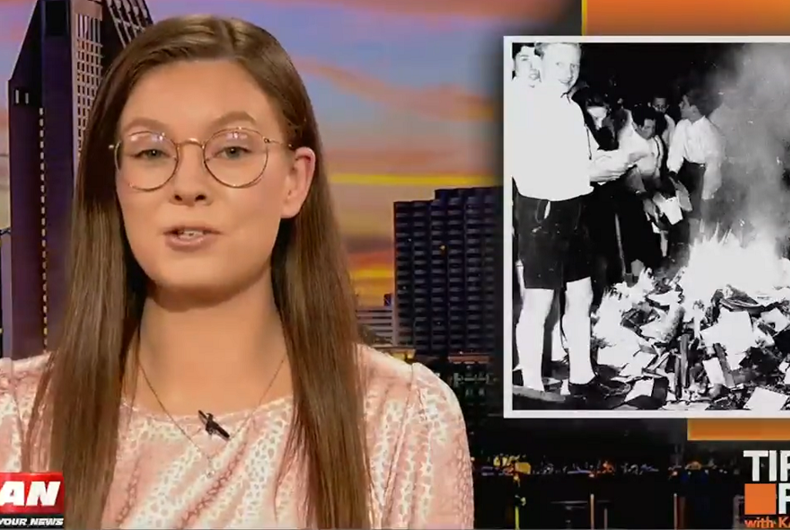 One America News (OAN) reporter Kara McKinney used a photo of Nazis burning books while calling LGBTQ literature “filth” that deserved to be banned earlier this week on her show.

“It’s the [unintelligible] Saul Alinsky Rules for Radicals tactic of accusing your political opponent of what you’re doing yourself,” McKinney insisted as she showed an image of the Hitler Youth burning books that were labeled “anti-German” in 1938.

But less than a minute later, she was arguing for banning books.

“I think banning pornographic books from school libraries was not only justifiable, it’s the only moral option,” she said.

Of course, no school libraries are handing out pornography to students. What she’s talking about is the presence of LGBTQ-themed books in school libraries, which conservatives have been calling “pornography” for the past year.

McKinney pressed on: “It’s our duty, in fact, to purge our schools of such filth.”

Yes, McKinney is using a photo of Nazi youth partaking in a book burning to argue that banning LGBTQ books in public schools is good. She says banning these books "is not only justifiable but the only moral option, it's our duty in fact to purge our schools of such filth" pic.twitter.com/TeLOxkngFW

If anything, McKinney’s use of the Hitler Youth image while talking about banning LGBTQ literature is apt; the Nazi Party destroyed Magnus Hirschfeld’s Institute of Sexology – which did pioneering work on understanding LGBTQ identities, including transgender people – in 1933, years before the onset of World War II.

The Institute of Sexology, founded in 1919, was a pioneering research institute on homosexuality and transgender identity. Hirschfield himself advocated for an end to Paragraph 175, the German law that criminalized homosexuality, which made him a target of the Nazis.

On May 6, 1933 — several months before Adolf Hitler became chancellor of Germany — the Institute of Sexology was broken into and occupied by a Nazi student organization. Several days later, the contents of its library were moved to Bebelplatz Square in Berlin and burned, according to the Holocaust Memorial Day Trust.