And the anti-LGBTQ+ activists strike another hospital.   Understand what they are doing, this is terrorism against a business doing lawful / legal activity.  These haters cannot get their way at the ballot box so they need to threaten doctors and hospital to scare them, to make them so afraid they won’t do the legal act of caring for trans kids.   They are egged on by republicans who think targeting and attacking a vulnerable segment of the population will secure an election win.   As for the issues of the links in the presentation, even if you think that kids from preteen through to older teens don’t know how to shop online at these legal sex shops I would tell you that kids can google sex toys better than most adults, but the important thing is the presentation was for adults not children.     Remember the goal of these activists is to remove the LGBTQ+ from society.    Hugs 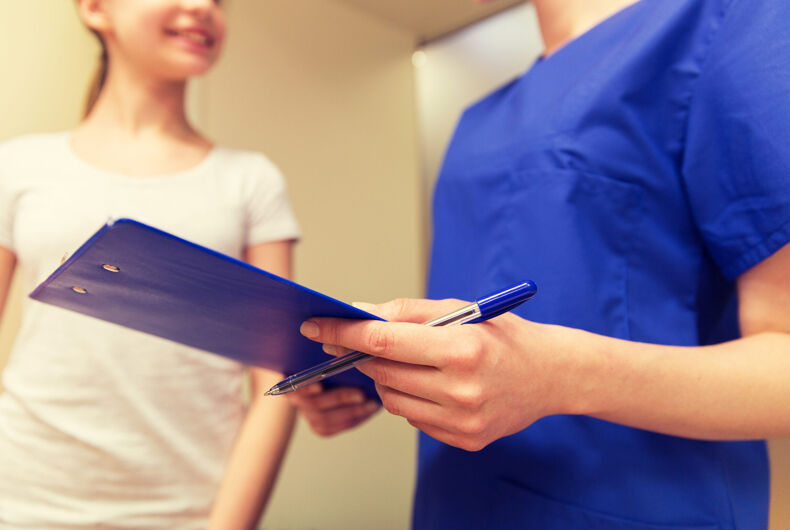 Christopher Rufo, a 38-year-old anti-LGBTQ right-wing activist, is claiming that a Chicago children’s hospital has partnered with public schools to promote “radical gender theory,” kink, and sex toys to children.

As “proof” of his claim, Rufo pointed to a slideshow presentation given by representatives from the Ann & Robert H. Lurie Children’s Hospital of Chicago to administrators, teachers, and staff in middle- and high-schools located in four of the city’s public school districts.

The slideshow, entitled “Beyond Binary: Gender in Schools,” discussed how school staff can make students feel safe regardless of sexual orientation or gender identity. It defined terms like cisgender and non-binary, and transphobia; discussed the historic and societal impact of gender discrimination; shared statistics on the challenges facing LGBTQ students; offered suggestions for making schools feel more welcoming to such students; and encouraged participants to discuss how to handle in-school incidents involving students coming out or those who object to LGBTQ-inclusion in schools.

It made sense that the hospital would offer such a presentation to schools since it also provides gender-affirming healthcare to trans and non-binary youth.

He took particular offense at the last two pages of the presentation which contained links to additional resources, including support groups like GLSEN, PFLAG, and the National Center for Transgender Equality; educational websites like the Public Broadcasting System, Howard Brown health services, and the Chicago school system’s documents on gender inclusivity; as well as online articles from Teen Vogue about LGBTQ sex education and queer-inclusive books for teens.

“The links include graphic descriptions of sadomasochism, bondage, pornography, and transgressive sex,” Rufo wrote. “Beyond the lurid nature of some of the content, these documents reveal a profoundly disturbing collusion between radical gender activists in the medical system and the public school bureaucracy.”

Lurie Childrens Hospital Be… by wonkette666

Rufo wrote that the hospital “has laundered the promotion of queer theory, synthetic sexual identities, and child sex toys under the guise of ‘health and education,’ devoting significant resources toward building what policy analyst Leor Sapir has called a school-to-clinic pipeline. The process is simple: children learn about and adopt ‘gender expansive’ identities in schools, which then direct them to gender clinics that can provide puberty blockers, hormone therapies, surgeries, and drug regimens that often add up to hundreds of thousands of dollars in costs over time.”

In short, Rufo believes that the presentation was just a way to help the hospital make money off of trans and non-binary youth.

While one could argue whether the hospital should’ve included such resource links in their presentation or whether educators should send students to such websites, the presentations were only shown to adults and there’s no proof that the links were ever shared with any children. Additionally, sex toys, packers, and pumps are normal products for humans exploring sex and the transition process.

That doesn’t matter though because Rufo’s claims seek primarily to shock people who are largely ignorant about or opposed to trans healthcare, sex education in schools, and what teens view privately online.

Rufo touts himself as an “activist challenging critical race theory and gender ideology in America’s institutions.” The New Yorker credits him with helping create the national panic over so-called “critical race theory” (CRT) being taught in schools.

But Rufo’s opposition to CRT and LGBTQ issues in schools is part of his long game in sowing distrust against the public education system in order to champion for-profit school privatization.

He has repeatedly claimed that public school teachers regularly sexually abuse children and that classroom LGBTQ discussions are meant to “groom” children for such abuse. He was present when Florida Gov. Ron DeSantis (R) signed the infamous “Don’t Say Gay” law, The New York Times reported.

As Rufo is likely aware, fomenting anger at gender-affirming children’s hospitals inspires others to issue death and bombing threats against pediatric doctors. This might discourage them from rendering such care and also hinders their ability to care for other sick and injured children.