Rep. Marjorie Taylor Greene (R-GA) just shared pictures of one or more minors on Twitter in order to attack the family of a possibly transgender young person.

“This child is not old enough to vote, buy cigarettes, or watch an R rated movie, but they let her choose to have them cut her breast off,” Greene wrote while sharing a tweet with two pictures. One of the pictures shows a girl in her early teens fully dressed, the other shows a young person in their late teens or early 20s shirtless after what appears to be a double mastectomy.

“My Protect Children’s Innocence Act will stop this,” she wrote, referring to a bill she introduced last month.

Greene retweeted anti-trans activist Chloe Cole, who wrote, “Reality check: Nothing is okay about this.” 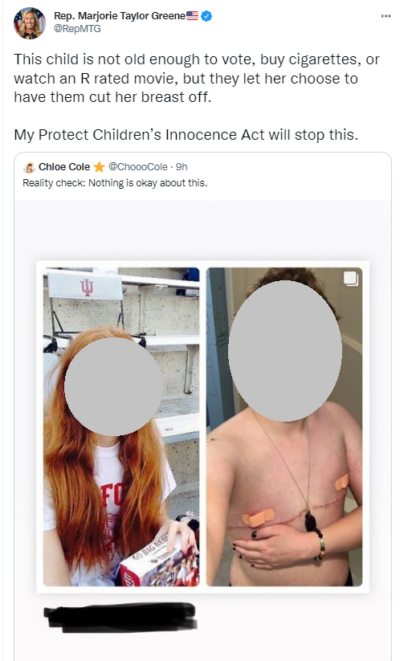 Neither Greene nor Cole appear to know the name of the person or people in the photos — they don’t look like the same person, but that may be because of the time that passed between the two photographs — how old they are, or why the latter person had undergone surgery. If the person was over the age of 18 or had a mastectomy for reasons unrelated to gender-affirming care, then Greene’s bill wouldn’t have prohibited the procedure.

Gender-affirming surgery is not performed on minors — in fact, the oft-repeated claim was rated “false” by Politifact. Nevertheless, the idea that children’s hospitals are performing gender-affirming surgeries on young children has gained traction on the far-right this past month, leading to harassment and death threats against pediatricians working at children’s hospitals.

People on Twitter criticized Greene for sharing the images of a minor without permission from the family and for trying to interfere in another person’s medical decisions.

That should be a lawsuit waiting to happen. Using photos of underage children without the parents permission.

— BLUE WAVE will wash away the MAGA stain on America (@PatrckSteve) September 8, 2022

First show the consent they got from the parents to use these 2 photos to make the kid feel bad.

— BLUE WAVE will wash away the MAGA stain on America (@PatrckSteve) September 8, 2022

According to MAGA, this child is old enough to marry, get pregnant and have a child. Focus on your own district Marge. Marcus Flowers is.

This child may be intersexed. There may have been medical reasons.
This picture may be photoshopped.
Exploiting children on social media is disgusting.
No source to back up your claims.
You want outrage and hate.
You want attention.
You are exploiting a child to get it. Sick

How many children do you actually think do this? This is such a non issue, and this is the hill you choose to die on. 🤣😂🤣😂 also, child rape victims are more of a problem, and you are fine with their uncle/father impregnating them, and having it to term. You don’t care.

I’m wondering how many, if any, of these families you have actually spoken with and listened to? Not my place to judge them. Not yours either.

are they even pictures of the same kid. Eyes and nose look different.