I have covered the swimmer ground before.   In the past anti-trans people have tried to claim that men who cannot win in men’s sports against men then claim to be women so they can compete in an easier contest against women while biologically still men.   That is not just not happening.    Male swimmers are competing in a men’s contest on Monday and then on Wednesday decide to swim in a female contest.   What is happening is trans women living as the gender they identify as wanting to participate in a sport they enjoy.   To participate in the sport a trans woman must meet the medical qualification of what is considered the normal hormone ranges for females.   Often there is at least one or two years of transitioning before joining a women’s team, during which time the benefits of male puberty are diminished / dissipated / removed.    Also it is important to note that trans women do not win all the events and take all the awards.   You know what determines the winners of these sports events?  Those who have natural talent and practice the sport more, longer, harder, and make the effort to be the best at their sport.

But the sports thing is really a misdirection.    It really is not what these bills are for.   Remember the governor who vetoed on of these bills because there was only one trans child in their schools and that child was not interested in sports?   The republican legislature overrode the veto because it is entirely an issue to rile up the base and get the rabid right wing to vote.   It is not about kids, health, or education but it is entirely about getting the religious people and the rabid right who cannot accept the changes in society to be upset enough to vote republican.   That is entirely want this is about.    Are you uncomfortable that your traditions are not universal now, that other ideas are present?  Return to the past where it was all good and you were comfortable because you understood it all, vote republican.   This is what it really is what these anti-trans / don’t say gay laws are about.    Hugs 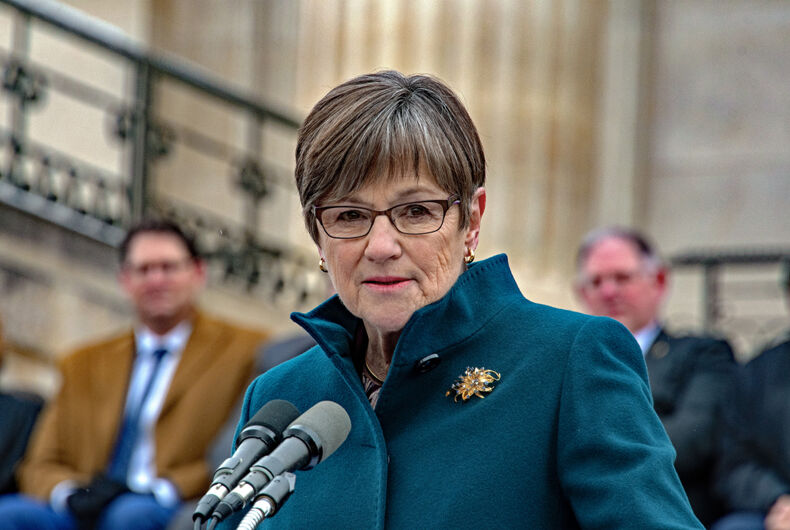 The Republican Governor’s Association (RGA) is saying Kansas Gov. Laura Kelly (D) is lying about her record on transgender rights as she faces attack ads from the conservative organization over her two vetoes of transgender sports bans.

In 2021 and this past April, Kelly vetoed bills that would have banned transgender girls from participating in school sports as their gender. The bills did not similarly restrict transgender boys.

“We all want a fair and safe space for our kids to play and compete,” she said when she vetoed this year’s bill. “However, this bill didn’t come from the experts at our schools, our athletes, or the Kansas State High School Activities Association. It came from politicians trying to score political points.”

RGA has been running ads attacking Kelly for those vetoes. One of those ads featured cisgender swimmer Riley Gaines who said, “I was forced to share a locker room with a biological man. It was uncomfortable and it was wrong.”

“This has to stop,” she concluded. “If Laura Kelly can’t protect women, she shouldn’t be governor.”

In one of her ads, Kelly responded to the claims succinctly.

“You may have seen my opponent’s attacks,” she said in the ad. “So let me just say it: of course men should not play girls’ sports. OK, we all agree there.”

The rest of the ad calls out her opponent, Kansas Attorney General Derek Schmidt (R), for his support of cutting school funding.

Her statement is true: these laws are not about stopping boys or men from playing girls’ or women’s sports, they’re about banning a subset of girls and women – those who are transgender – from participating in school sports. Like most mainstream Democrats, Kelly is in favor of transgender people getting access to full educations – sports education included – but isn’t in favor of removing gender distinctions in schools.

But Republicans are now accusing her of lying, mainly because they refuse to acknowledge transgender people for who they are.

“Laura Kelly is looking Kansans in the eye and flat out lying about her record of failing to protect girls and women from having to compete against biological men in athletics,” said a spokesperson for RGA Kansas in a press release issued today.

The press release didn’t defend Schmidt when it came to his record on cutting funding for schools.

“Laura Kelly vetoed laws to protect women & girls in sports, not once, but twice. If Laura Kelly can’t protect women, she shouldn’t be governor of Kansas.” #ksleg pic.twitter.com/zEjLLamuiS