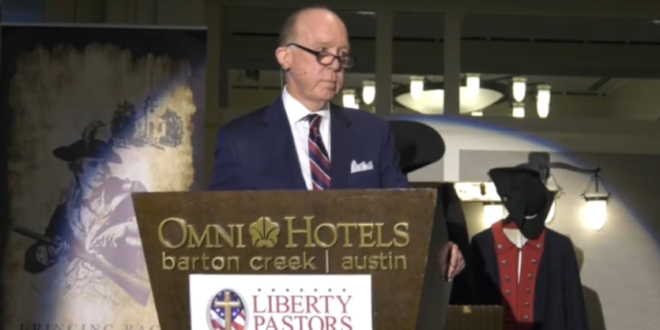 “So this is how it works. You’re injected with graphene oxide. Once injected with the so-called vaccine, you become connected to the internet of things and you can be mind-controlled by artificial intelligence.

“This is trans-humanism. The internet of things. How would you like to be connected so that your thinking would no longer be your thinking, but it would be non-biological?

“The real question is who will control the computer that give you the messages? It won’t be your pastor.” – Anti-LGBTQ activist and supplements peddler Steven Hotze, speaking to a group calling themselves “Liberty Pastors.”

Hotze last appeared on JMG in August 2022 when he won a Texas ruling that may imperil insurance coverage for PrEP medications nationwide.

In April 2022, Hotze was charged with two felonies related to a bizarre 2020 “voter fraud search” incident. That case remains pending.

Hotze also appeared on JMG in 2020 when he left a voice mail for Texas Gov. Greg Abbott, telling him to “shoot to kill” Black Lives Matter activists.

You may recall that Steven Hotze has compared gays to “communist termites” eating away at America’s moral fabric. He is also fond of declaring that it’s now a hate crime to denounce homosexuality.

It was Hotze who bankrolled the successful campaign to repeal Houston’s “wicked, evil, Satanic” LGBT rights ordinance, during which he compared gays to rapists and murderers.

According to Hotze, same-sex marriage will result in children “practicing sodomy” in kindergarten.

In 2017, he appeared here when he “prophesied” that God will deliver “just retribution” to lawmakers who vote for LGBTQ rights.

When he’s not calling on God to kill politicians or for the governor to kill Black Lives Matter activists, Hotze sells “miracle” supplements because high cholesterol doesn’t really cause heart disease.

Watch the clip. There are slides!

Steven Hotze, a Texas-based religious-right activist and doctor, says that those who have received COVID-19 vaccines "become connected to the internet of things and you can be mind-controlled by artificial intelligence through maybe 5G." pic.twitter.com/BjpBqbPqja

ANd here I thought my cell reception was better becasue AT&T built a new tower a few blocks away. Noow we know that it is all part of the plan to control people, and we’re [aying for it through our cell phone bills.

The easiest solution for conservatives would be to turn off their cell phones, and disconnect their home internet completely.

Now their conspiracy theory is about graphene oxide? It’s endless. They literally have not a single anchor in our collective reality.

If Elon Musk suggested this as the next Tesla product, these same people would be slobbering over how genius it is.

As a person who actually works on this stuff, he’s so appallingly stupid that it boggles the mind. 5G is a problem but 4G wasn’t? And you know what the “Internet of Things” is? Any device that connects to the Internet and sends or receives data over it. The reason why they call it that is because those things might not be what we typically think of as “computers”. Your oven could be an ioT device because you could start it preheating while you’re on the way home. Your clothes dryer might be able to send performance data over the net and notify you if it needs service.

Just wait until he discovers what a “personal cloud” is… and no, it’s not a fart or BO. It’s when the various IoT devices on your body work in conjunction with each other to assist you. Your phone working with your watch and wireless headphones is a personal cloud. And as we move forward, more things that are on or in you will become part of your personal cloud. Hearing aids, contact lenses, implants in your body that monitor blood chemistry, etc… You think they’ve lost their shit now, just wait til they decide this is the “mark of the beast” they ramble on about.

Honest to sweet dead jesus, why isn’t this guy laughed right off whatever goddam soap box he’s on?

Can it fix my awful backache I have today?

He’s presenting to a group of White males who couldn’t define quantum if it were beamed into their brains via 5G.

And how did God deal with the Tower of Babel?

Well, let’s see, according to your laughably puerile book of fairy tales, god made everybody speak a different language so that they couldn’t talk to each other to build the tower to heaven.

Then, humans developed new universal languages called “mathematics” and “science,” which allowed them to build the tower, where we discovered there’s no such dumbass thing as heaven.

Republicans are crazy, yet polls show them pulling ahead in key states like Georgia, Wisconsin, and Nevada.