This country is not a theocracy yet!  Why are these religious bigots crafting legislation to instill their religious beliefs into secular laws?   I am tired of these people insisting I live according to the limits of the people who lived 2,500 years ago.   Societies grow, they change, they improve, and the way we treat people shows that growth, unless you live by the regressive rules of a religion.   Hugs 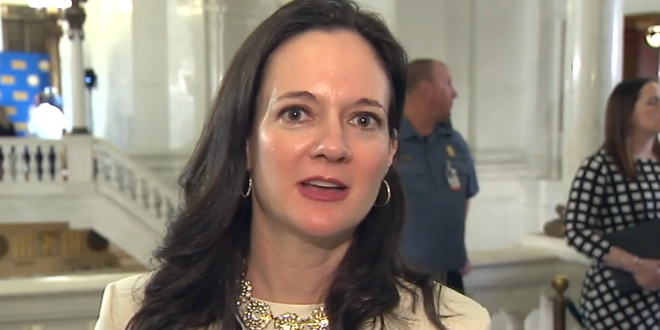 Pennsylvania GOP state lawmakers are pushing a bill to limit school instruction that is more expansive than the Florida legislation that has been described by its opponents as the “don’t say gay” law. During a rally at the Capitol, Republican lawmakers and supporters framed the legislation, House Bill 2813, as a way to guarantee parental oversight and control over the availability of school materials that they portrayed as increasingly obscene.

“It is patterned after the Florida bill, but mine goes further,” said Rep. Stephanie Borowicz, R-Clinton/Centre, the bill’s prime sponsor. “It really needs to be protected up through 12th grade, we need to go all the way,” she told reporters. The GOP gubernatorial candidate, Sen. Doug Mastriano, R-Adams/Franklin, appeared briefly at the event to voice full-throated support for such measures.

Borowicz last appeared on JMG in March 2020 when she introduced a resolution calling for prayer because the COVID pandemic was God’s punishment for sin. Her first appearance here came in March 2019 when she held widely-criticized floor prayer for conversions to Christianity moments before the swearing-in of a Muslim rep.

This is so sad and hateful. In our great Commonwealth, we don't “other” people. That is literally antithetical to our history.https://t.co/bECHWH51VK

The absence of talking about LGBTx people communicates a lot — it says we’re “controversial”, tainted in some way, not to be discussed in general public… it teaches shame. Which is 100% everything the Christian agenda wants to teach about us.

How soon before we go back to 1976 and they try to ban gay teachers?

It’s funny you should mention 1976. I remember that year vividly. I was a junior in high school who had just come out to myself (albeit to no one else) and I can remember reading an article that year in Newsweek magazine about the happy homosexuals who were making a community for themselves in San Francisco. Back then, it seemed like the world was young and new and that all things were possible. Little did I know the fierce backlash that would result from those happy homosexuals who were just trying to live their lives with happiness and some degree of integrity. But I would soon find out. Anita Bryant appeared with her crusade the very next year and it wasn’t long afterwards that Jerry Falwell and Ralph Reed appeared on the scene to turn the clock backwards.

“Borowicz’s bill also contains requirements for parents to be notified about health services provided through schools,”
So if a school nurse found too many bruises on the kid, the school would have to give the abusive parents a heads-up? Yikes!

Yep, to these hateful higots children have no rights, they are just pieces of property so when property gets damaged the slave owner should be notified

Her district is smack-dab in the middle of the state, but avoiding Penn State University and its bedroom communities. She’s a stay at home mom and appears to believe that’s the only acceptable role for women– probably hates women who work for wages (including single parents . . . especially single parents).

These people think that if their children never hear the word “gay” they won’t be gay. In the words of the old commercial:

Her (home schooled?) kids are more likely to have their “gay” education limited to insults.

In school? They’re supposed to get their sex education the traditional way, from the older kids out behind the bike shed.

Although the plain text of the Pennsylvania bill would include a ban on any instruction regarding sexual identity – even heterosexuality – the rhetoric around such laws has clearly targeted LGBTQ people, Pick said.

Only when they say the schools are “grooming” you kids to be gay or trans.

They really want erasure of anything LGBT. Right now there is a big uproar in Sarasota FL because a teacher had to revise her teaching material so it didn’t mention Sally Ride was a lesbian or had a long term partner.