The right has tried hard to equate drag shows with sexual orgies.   They have convinced a lot of people that drag shows are the same as strip shows.   Drag shows are not trans gender events either.   Drag shows, doing drag is simply dress up role playing.   It is no different than Halloween.    The right loves to demonize anything they dislike or cannot understand.   One last point.    Dragging your kids to a hate protest where you are screaming and saying nasty things about a group of people is indoctrination and grooming them to hate.   If these parents don’t want their children to go to drag show events then don’t take them there, but don’t try to deny parents who do want their kids to see them and enjoy them their parental rights to grant their permission.   You raise your kids, don’t try to force others to live by your hatreds.   These people want to force everyone to have their views of things, their idea of right and wrong, they don’t care that others disagree with them.   They don’t care about the many parents and others that know these events are just good fun, but they want to rule over others and force everyone to live by their views.    Hugs 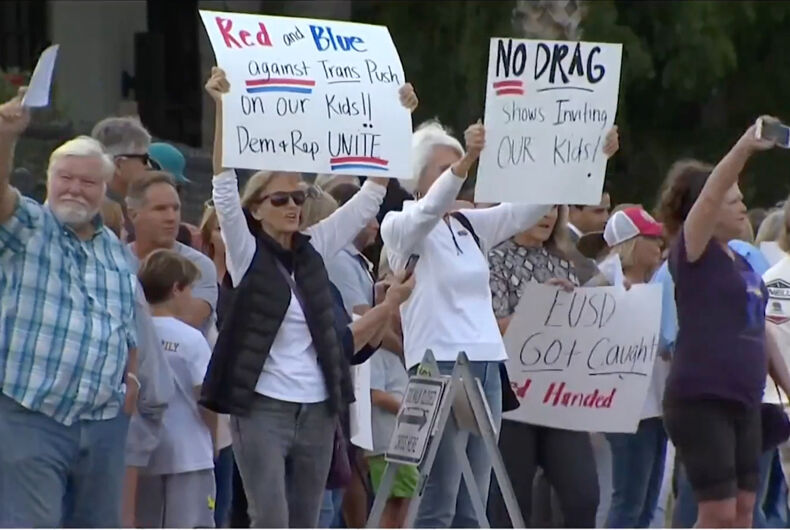 A group of around 60 people gathered in Encinitas, California earlier this week to protest a family-friendly queer Halloween event.

“A lot of people are just generally not comfortable with the idea of pushing drag queen shows on little kids but separate and apart from that I think the biggest concern with this event are the sponsors,” said Paul Jonna, an attorney who says he was contacted by concerned parents. “We submitted a public records request to find out more about their involvement, their communication with these sponsors and sort of this event.”

“It is very clear what the agenda is,” said Joleene Burts, who home schools her children. “It is not a family-friendly event and the district is lying to our children and these are our children.”

According to a September statement from the school district, Boo Bash is a “non-district event” and all digital flyers distributed through Peachjar feature a disclaimer noting that “distribution of this flyer does not imply endorsement by the Encinitas Union School District.”

But TransFamily Support Services director Kathie Moehlig told San Diego’s NBC7 that the flyer would not have been delivered to Encinitas parents via Peachjar if the district had not approved it. The frequently asked questions section of the platform’s website clearly states that flyers submitted to Peachjar by community organizations are “routed to the appropriate school district(s) for approval.”

On Tuesday, the district released a statement claiming the flyer had been removed from the platform three weeks ago because it did not meet approval criteria.

Moehling said that the flyer remains on the Peachjar sites of four other schools. She also dismisses the idea that Boo Bash’s Disney-themed drag show is inappropriate for kids.

Despite the protest, Moehling said that Boo Bash will take place as scheduled on October 29.

“We’re not going to back down from doing what we know is right and appropriate to support these youth and their families, just because some people think they can use it as their mega piece to get talking points and get attention,” she told KGTV in September.