A gang of Christian thugs!  The Christian Taliban.   People demanding their way who refuse to follow the rules, threaten and demean others, believe the country is a theocracy instead of a democracy.    All because they can’t / wont accept the advancements in society of understanding and accepting of differences / diversity.    They are not content to stop their kids from reading and learning acceptance / tolerance but they are demanding no kid can be allowed to read it even if that child’s parents approve.   This is about controlling everyone else and someone else’s child.    This is forcing their church doctrines of what is acceptable on everyone else.   Having to go see a counselor who will call your parents means no kid will check out the book and other kids will wonder what the kid who wanted to read the book did wrong.    This is about saying anything not straight and cis is wrong and must be hidden.   Hugs 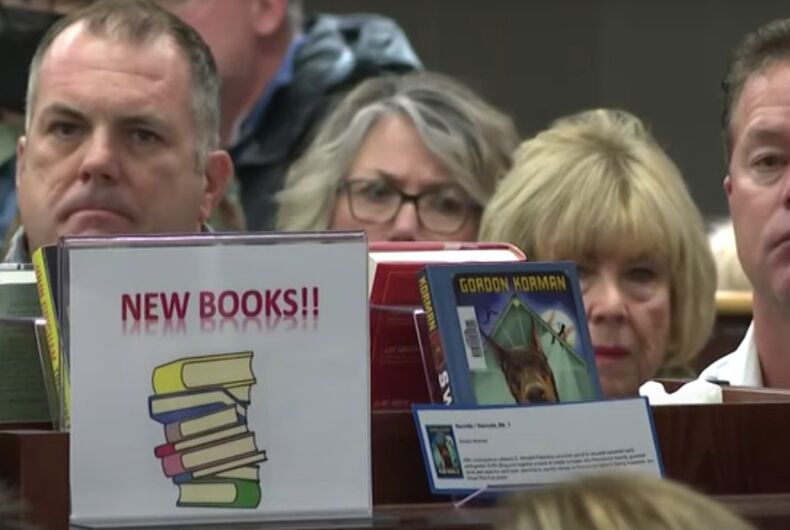 Parents at the board meeting Photo: WZZM 13 screenshot

If students in a western Michigan school district want to read the graphic novel Gender Queer: A Memoir, they’ll have to meet with a school counselor who will then call their parents for permission.

This is the “compromise” that the Spring Lake School Board reached in a 4-3 vote after a contentious Monday night meeting. The meeting ended early and left board members fearing for their safety after screaming parents refused to follow meeting rules, including one woman who called the board members “sick individuals.”

The board met in order to discuss a parent who wanted Gender Queer to be removed from the district’s library shelves. The memoir, written by Maia Kobabe, covers eir experience discovering and accepting eir nonbinary and asexual identities. The book doubles as an instructive guide for those exploring their own identities.

The meeting spiraled out of control as the first speaker tried to violate the three-minute time limit for all speakers. As a board member took her microphone, she called the board “sick individuals.” Gradually, speakers on both sides of the issue became loud and unruly.

One parent said they objected to the book’s “explicit sexual content” rather than its LGBTQ content, possibly referring to several passages in the book that describe Kobabe’s exploration of eir sexuality.

Katie Pigott, a board member who voted to keep the book on library shelves, told parents, “Students need our affirmation and support much more than a segment of parents need another layer of control over other people’s choices.”

As the crowd became angrier, the board called for a break in an attempt to calm participants. But when the board reconvened, parents continued shouting, and the meeting had to be adjourned — the crowd booed as board members rose from their seats and left the room.

“Two of the board members commented to me that they felt a little bit fearful for their own safety,” district superintendent Dennis Furton told The Daily Beast. He also said that the district already had a policy for parents to prevent their kids from checking out specific titles by alerting the district’s libraries.

School Board President Jennifer Nicles, who also voted to keep the book on library shelves, said of the compromise, “I also know this decision can be seen as simply another hurdle for a student in need.” She said she’d work with the district media specialist to ensure that other resources are available to help LGBTQ students in need now that access to Gender Queer has been restricted.

Board member Kathy Breen, who also voted in favor of keeping the book available, said that the Monday night meeting is just part of a national political trend of “parent’s rights” groups who have been emboldened by the upcoming national midterm elections.

“Sure, some people legitimately may not care for [the book],” Breen said, “but I feel like the book was just another tool to create some chaos.”

In an article for The Washington Post, Gender Queer‘s author said that eir own knowledge of LGBTQ identities was assisted by library books.

“By high school, I had met multiple out gay, lesbian and bisexual people, but I didn’t meet an out trans or nonbinary person until I was in grad school,” Kobabe wrote. “The only place I had access to information and stories about transgender people was in media — mainly, in books.”