These people vote and right wing media promotes them.   Reality means nothing to these people.   But why kill the babies, just milk the blood in regular donations keeps the blood fresh and coming in.   These people don’t think through things very well. 🙄   Hugs 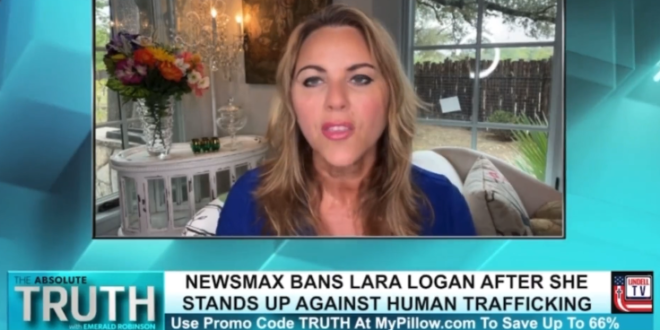 Just banned by Newsmax, Lara Logan has some thoughts:

The reason I believe that people reacted that way is it’s all about the children. The question they don’t want us asking is where are all the missing children?

What happens to these children? How can hundreds of thousands of kids go missing in the United States every year and nobody knows where they are?

They just vanish? I don’t think so. Every sex trafficking ring worldwide knows, bring the kids to the United States that this administration is participating in the trafficking of kids.

The report that you showed have talked about the blood of young children being the secret to anti-aging. And why does nobody ask where does blood come from?

Logan may be too fucking crazy even for Newsmax, but not for Mike Lindell’s Frank Speech platform.

After getting banned from Fox for saying Fauci is Mengele, then from Newsmax for saying Satanist elites drink the blood of children, Lara Logan doubles down and says hundreds of thousands of kids in the US are being kidnapped so elites can drink their blood to fight aging. pic.twitter.com/Wh1WHiX0U3

When most people think about missing children, they imagine children being lured into white vans. But if a father or mother takes a child without permission, and they don’t have custody, that’s considered a missing child, and the vast majority of missing kids are due to family abductions. There are more than 3,000 attempted snatchings per year, and more than 90% of those are runaways or parental abductions.

I turned off the Amber Alerts on my phone because 99% of them had a very accurate description of the abductor, the car, the license plate, etc.

Don’t wake me up in the middle of the night when you know the abductor’s name, and where he/she and all his/her relatives live.

Amateur! I reach into their bodies and pull their hearts out, leaving them alive while I lower them into a fiery hell-like pit. As documented in Indiana Jones and the Temple of Doom.

The term blood libel refers to the false allegation that Jews used the blood of non-Jewish, usually Christian children, for ritual purposes. The Nazis made effective use of the blood libel to demonize Jews, with Julius Steicher’s newspaper Der Stürmer making frequent use of ritual murder imagery in its antisemitic propaganda.

Idk if the blood treatment works or not, but to me, chasing those brats around just isn’t worth it.

Thinking of buying this in Michigan and handing it out to the little Canadian goblins. 😉

5 thoughts on “Lara Logan: Biden Admin Is Trafficking Children So Elites Can Drink Their Blood To Fight Aging [VIDEO]”