The fact that every school official denies that there are litterboxes doesn’t matter to him because it is a great talking point to tarnish trans kids with.  Besides a right wing media has said it is happening so that is proof it is happening right?   Now I did find out that there are a few schools that do have emergency kits in classrooms that do include a bucket with kitty litter so that kids in a mass shooting lockdown stuck in the class room have a place to pee.   Columbine was the first school to set these emergency kits / buckets up in the classrooms.    It is not a littler box really, it is not for furries or kids playing dress up.   It is a sad commentary on our country these days that something so serious as our children being in hiding from an active shooter is misconstrued to attack trans kids and ridiculed an important safety asset.    Hugs 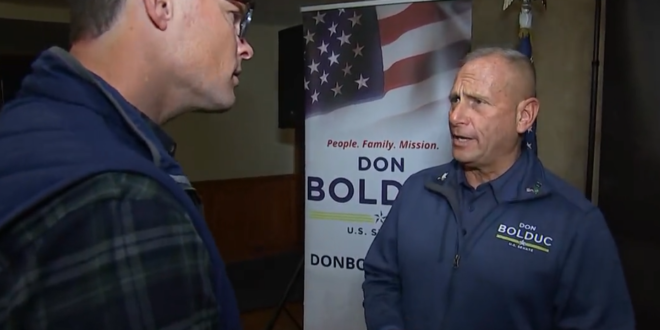 First, a reminder of his batshit claim:

“They’re putting litter boxes,” Bolduc said in the recording. “These are the same people that are concerned about spreading germs. Yet they let children lick themselves and then touch everything. And they’re starting to lick each other.”

Bolduc claimed this was taking place in schools in Claremont and Derry and named Pinkerton Academy, which took to Twitter this week to refute the allegation.

“It has come to our attention that at a recent event in Claremont Don Bolduc named Pinkerton in false claims suggesting that unhygienic, disturbing practices are taking place in our classrooms and spaces on campus,” the school said. “We want to assure our community that Mr. Bolduc’s statements are entirely untrue.”

And below is this latest. Watch.

NEW: Don Bolduc- only to @NBCNews says the school he accused of using litter boxes for children who identify as animals needs to "prove" the claim wrong.
He tells me a parent and a student told him it was happening and he is "not backing down." pic.twitter.com/s7CLx09uu2

Til Tuesday • 4 hours ago

Someone should ask Don Bolduc to prove that he’s not beating his spouse.

Low information voters will think ‘it’s so outrageous it must be true’.

They believe all that bullshit from Sunday School for no reason other than someone with authority told them to believe, so why wouldn’t they believe this?

Yes. Pay no attention to the erractic and devastating weather. Or Nazis. Or child molesters at the local church. Or caged children at the border. Or nuclear holocaust

Its litter boxes and drag queens that are the real problem

Well, as people here have pointed out before, schools are buying litter boxes for their classrooms. As part of an “active shooter classroom lockdown” kit, because fucking Republicans think arming the mentally unbalanced is a good idea.

Instead of politely saying “this is untrue,” they need to say “this is a lie.”

These people think never backing down is a virtue. When you’re objectively wrong and your position is just plain fucking stupid, it’s time to back down.

Besides, who wants to hear this bullshit from a guy who hasn’t even proved that he doesn’t regularly rape babies and goats and baby goats? What a sicko.

They think “never apologizing” is a virtue. It’s just a sign that you didn’t grow up.

Remember when they called Obama the “apologizer-in-chief” or whatever? He was already bombing the Middle East. What did they want him to do, nuke Isis?