How is this guy any different from the Afghan Taliban.   He complains about made up teachers showing kids porn and grooming then yet ignores the daily arrests of religious figures for actually molesting / raping kids.  Didn’t I read something about a mote, eyes, beams somewhere?   People this is the fastest growing sect of the Christian religion and it is built on hate, anger, and full power to white males and some power to Christian females over the non-whites as her male owner will allow.     Read this and know that this is the group pushing the hardest for the don’t say gay bills and attacking drag queens / drag queen story readings.   I asked who the next targets were going to be, and here you see it.    These are the real purity and moral police thugs.   They are going to come after you eventually.  Hugs 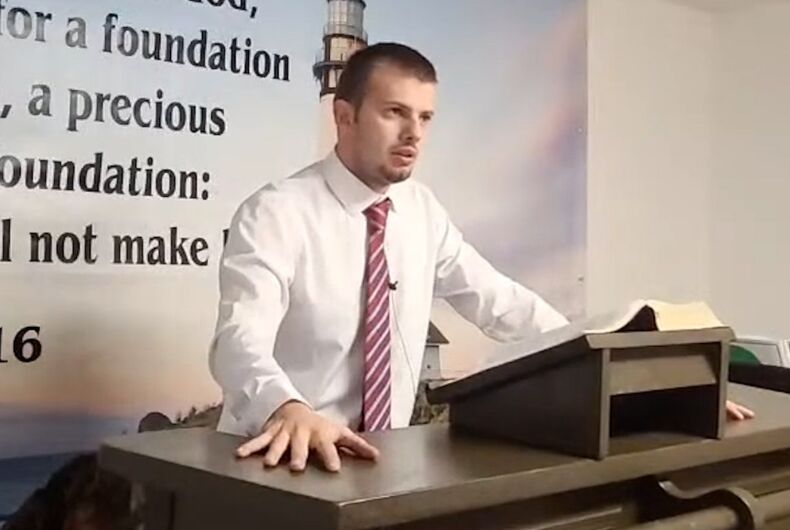 A hate preacher who called for teachers he claimed were “grooming” kids to be beheaded on TV now says that far-right Rep. Marjorie Taylor Greene (R-GA) is a fake conservative because she’s not at home being obedient to her husband.

Jason Graber — a New Independent Fundamental Baptist (New IFB) preacher at Sure Foundation Baptist Church in Spokane, Washington — made his comments about Greene during a recent sermon about the midterm elections.

“If we have this ‘red wave,’” Graber began, using the term for the expected wave of Republican election victories, “Are they gonna do anything? Are they going to pass, you know, the abortion ban nationwide and have all abortion doctors retroactively put to death? Are they gonna do that? No. Why? Because they’re cowards.”

“Today we have Marjorie Taylor Greene,” he continued, “and anybody that votes for her, you’re not real conservative. Fake conservative.”

“Marjorie Taylor Greene should be at home, being obedient to her husband,” he added, apparently not realizing that Greene’s husband filed for divorce in September.

“These so-called conservative women….Why are we putting them in a position of leadership when they can’t even figure out which good husband to marry? Because any husband that allows his wife to go and run for Congress is a pathetic beta man. Okay, that is wrong. That is wicked. There’s something wrong with that man. He shouldn’t show his face in public. He should be so embarrassed.”

He adds that Marjorie Taylor Greene backers are "fake conservatives" because she "should be at home being obedient to her husband."

(He's unaware of her divorce.) pic.twitter.com/uCwczxJy4A

It’s notable that Greene, who is rabidly anti-LGBTQ and a self-described Christian nationalist, isn’t nearly conservative or religious enough for Graber.

That makes sense considering the extremism of Graber and other New IFB preachers. While New IFB isn’t affiliated with any mainstream Baptist denomination, both Baptist and New IFB teachings exhibit anti-LGBTQ bigotry, antisemitism, and misogyny. New IFB, however, goes a step further, calling for the execution of LGBTQ people while Baptists merely condemn queer people to hell.

Graber himself has previously called for the execution of gay people. In April, he called for LGBTQ-accepting teachers to be shot in the head or beheaded on live TV because, he claimed, they’re “grooming” kids for sexual abuse. The grooming claim has been repeated by mainstream Republican politicians as a reason to ban LGBTQ content from public schools.

“Apparently in schools today, they’re literally grooming the kids to… be taken advantage of,” Graber claimed.

“They’re showing pornographic images to children,” he added, without providing any proof whatsoever. “Preachers need to get up and say, ‘Well, teachers that do this, they should be put to death. They need to be taken out and shot in the back of the head. Because… they’re pedophiles.’”

“We need to make these executions public,” he continued. “We need to find these teachers that are showing pornographic images and grooming children, we need to find them, try them, get the television out, we need to get FOX News, CNN, every YouTube channel out there, put it on television. We need to show them being publicly beheaded… Otherwise our nation is gonna turn into a literal Sodom and Gomorrah.”

Christian hate-preacher Jason Graber, who believes the right-wing "groomer" lies, says such teachers should be shot in the head or beheaded on live TV.

Greene has previously called for violence against transgender and non-binary camp counselors who may have slept in the same cabins as fifth-grade girls at a three-day science camp. Greene also said that trans kids “groom” other children, pushing a centuries-old lie that LGBTQ people sexually prey on children.

Meanwhile, neither Greene nor Graber have made any similar emphatic statements against the countless Christian religious leaders who’ve actually been found guilty of child sex abuse.