As I posted earlier today and despite something the anti-trans people try to push gender identity not matching birth assigned sex is not new, it is not being pushed in schools, and it is not being forced on kids.   It has existed all through history just as same sex attractions have.  Why not just give people equality and civil rights, why use old incorrect old traditions or religious dogma to stand in the way of the best medical understanding we have today.   In 2022 we should not be denying the advanced reality we have to pretend that people that did not even understand to wash their hands had a better understanding of medical gender or sexual attraction.   Also understand that in the end of the story they tried to bully this man into wearing female clothing that the sheriff thought he should be wearing.   The authority of law had decided on their own that this person who by dressing and acting as the masculine person they were so upset the legal authorities they tried the best they could to force them into obeying.   But Harry understood his gender and who he was and was willing to die first.    Just like the kids today willing to kill themselves instead of being forced to live as a gender they are not.   Hugs 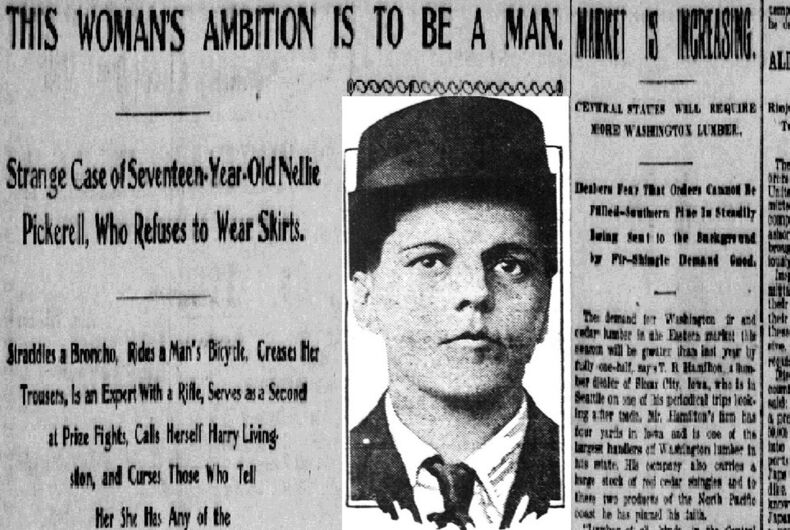 He was a skilled barroom brawler, trick shooter, and dashing womanizer known for having multiple mares in his stable at any given moment. If 19th-century trans “cowboy” Harry Allen hadn’t been assigned female at birth, John Wayne—or Elliot Page, if we’re casting looks—would have played him in a sexy biopic already.

Hollywood has spent billions depicting the frontier as a gun-slinging frenzy of cisgender masculinity, but in reality, the Old West was one of the queerer places in America. This sprawl of undeveloped land drew hundreds of closeted men, women, and gender non-conforming folk from across the United States out of suburban hidey-holes, and into a difficult but liberating new ecosystem where survival meant more than gender norms.

Given the Wild West was built on the bones of indigenous tribal lands, its more relaxed approach to gender wasn’t surprising. Tribes like the Navajo and Cherokee were never moved by Christian colonizers’ binary dog-and-pony show, recognizing anywhere from four to six “genders” on average. Their tradition of accepting “two-spirits”—transgender, gender fluid, and/or non-binary tribe members—as treasured community members bled subtly into the culture of the West, creating cracks of space for other queer people to experiment. Infamously lawless, the burgeoning area was too busy dealing with murders and dysentery to make Puritanical “masquerading laws” a priority, removing the legal leverage well-established cities used to subjugate queer bodies for offenses like **checks notes** wearing a dress while male.

The ratio of men to women was also around 14:1 on the frontier, which meant three things:

Because of this, some historians have reduced overt queerness to crossdressing as a survival tactic and all Brokeback Mountain sexual partnering as a supply and demand issue.

Harry Allen is a prime example of why these historians are silly.

Born in Indiana in 1882 to poor ranch workers, Allen’s family relocated to the Pacific Northwest just as he entered puberty. His mother, Jennie Gordon, gave interviews asserting her child rejected girls’ clothes almost immediately, dressing in pants instead of skirts and learning to shoot on horseback instead of taking up needlepoint. He formally changed his name to Harry Livingston in around 1900, switching to Allen once police records attached to “Livingston” became cumbersome. This name change was not, as some historians have suggested, for employment reasons.

Allen communicated clearly in a 1908 interview with The Seattle Sunday Times that everything from his name to hat choice was rooted in gender dysphoria, saying, “I did not like to be a girl, did not feel like a girl, and never did look like a girl,” he said. “Sick at heart over the thought that I would be an outcast of the feminine gender, I conceived the idea of making myself a man.”

As it turns out, Harry executed his idea a little too well for the time. He secured “manly” work throughout the Washington area, including bartending and participating in prize fights. He had no trouble attracting a parade of girlfriends, some quite desperate to marry him. Harry even assimilated into a gang of young men, though they participated in little crime outside of drinking and petty theft. But everything he did, from playing the piano drunk to messy breakups, became catnip for cops and local tabloids.

By 1902 Allen was in the newspaper regularly. His first publicized arrest in 1900 was for appearing “in male attire,” despite no local or federal law saying he couldn’t wear pants. Once the arresting officer was humiliated by the revelation Allen hadn’t committed a crime—and Harry loved polished menswear, always sporting a silk hat, tie, and a walking stick even on quick trips to the barber—the young man became a punching bag for law enforcement. “Vagrancy,” an intentionally vague charge used at the turn of the century to target LGBTQ people, appears on his rap sheet multiple times alongside accusations of bootlegging and prostitution.

While the frontier may have been safer than the average “lawful” city for queer people, Allen could never escape the burden police, judges, and media heaped on him. He was jailed in 1911 for selling liquor to an indigenous person, a minor and non-violent offense, but held on a massive bail for weeks while awaiting trial. During his imprisonment, the Spokane Chief of Police made bullying Allen into petticoats under threat of solitary confinement his personal pastime. Journalists enabled this by publishing weekly updates on whether Harry had given in to skirts. (He never did.)

By the time Harry Allen died of syphilis in 1922, he had been written up by the media no less than two dozen times, mostly for living as his authentic self and dating “young women of respectable parentage.” At the time of his passing, at least two paramours had committed suicide out of unrequited love for him, though it’s unclear if these reports were accurate or sensationalized tabloid fodder.

Allen remains strong evidence that gender dysphoria and trans ideology are not, as pundits today wail from their Twitter accounts, a new “social contagion,” but a long and well-documented part of the human experience no matter where those humans settle.

137 thoughts on “Meet the transgender heartthrob of the Wild West”