The drive for Christain nationalism in Florida is in full drive mode.   Stuff relating to Christians is allowed, Jewish and Black holidays are not allowed.   To justifying denying the presentation of what Hanukkah is the superintendent said that they would have to teach Kwanza and Diwali.”   This is added to the anything positive about the LGBTQI+ is banned but right wing fascism is good for teaching.   Hugs

A spokesperson for the district said officials a ‘trying to be careful’ in light of the new Parents’ Bill of Rights.

Pasco County Schools says it has reversed its decision to deny a mother’s request to give a Hanukkah presentation to her son’s fifth grade class after reporters contacted the district for an explanation.

A district spokesperson said the mother would have to first meet with school staff to set up guidelines, but that the presentation has been otherwise approved.

Rachel Long has visited each of her children’s classes yearly to explain Hanukkah — the Jewish “Festival of Lights” that takes place around the same time as Christmas and similarly involves gift giving — since her eldest son was in preschool. He’s now in 10th grade.

Her short presentation includes no mention of God or religion, Long said. Instead, it consists of her reading from a book explaining Hanukkah (also written as “Chanukah”), sharing traditional food, displaying a menorah, and giving toy tops (dreidels) to each child for an in-class game.

Not counting the pandemic in 2020 and 2021, the schools Long’s children attended welcomed her into the classroom every year without issue. That was until last week when she reached out to her youngest child’s fifth-grade teacher at his elementary school in New Port Richey to ask when she could come in this year.

Initially, the teacher seemed open to the idea. She told Long she would confer with school higher-ups “to determine what day and time would be best.”

A few days later, however, the teacher said that after speaking with school staff and district administrators, they recommended she deny Long’s request, citing Florida’s relatively new Parents’ Bill of Rights.

“As per discussions with the team and Admin, the new Parent Bill of Rights (sic) obligates us to follow the 5th Grade Standards as written,” the teacher said by text. “At this time, a Chanukah presentation is not in our standards.”

Long asked: “Then, I assume, no Christmas activities will be done?”

The teacher did not immediately reply. 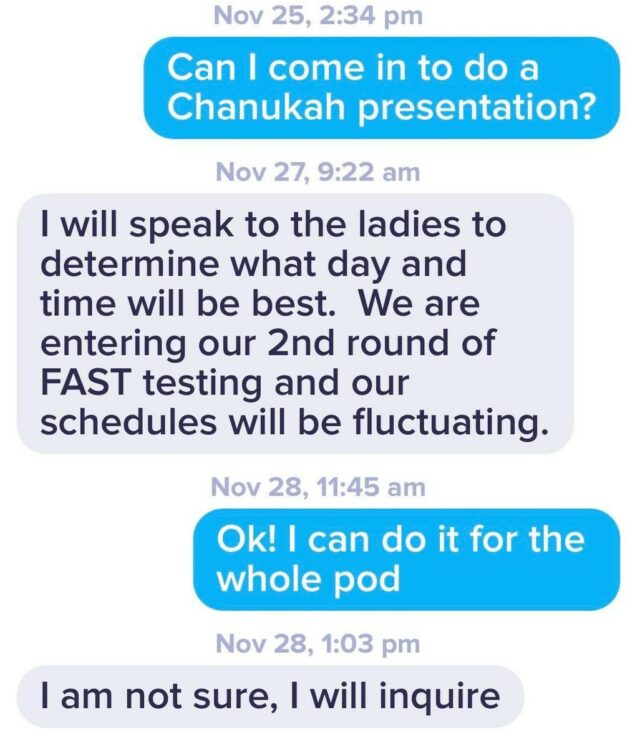 The Parents’ Bill of Rights, which Gov. Ron DeSantis signed on June 30, 2021, provides that parents can object to — and opt their child out of — instructional materials based on their beliefs about morality, sex and religion.

The only mention of holidays and cultural traditions in the Pasco School curriculum guide for fifth grade says students will read stories from “different cultures” and encourages parents to discuss the meaning of various holidays with their children.

CPALMS, the Florida Department of Education’s official source for education standards, includes approved lessons on holidays in world language, history, and civics classes and hundreds of allowances for multicultural education.

Long said the principal told her: “Due to the Parent Bill of Rights (sic), the school could not celebrate any holidays.”

Apparently, that doesn’t apply to Christmas, Long contended, noting Christmas-themed décor throughout a “holiday shop” in the school and a host of related activities.

“(The) kids are watching the musical, ‘Elf Jr.,’ during school, the school is completely decorated for Christmas, and there is a ‘Santa night’ planned,” Long told Florida Politics. “(The principal) explained these things by saying they are holiday-themed, not Christmas, and parents are able to opt their students out. Teachers are allowed to have Christmas trees in their rooms but are not allowed to do Elf on The Shelf.

“If students can participate in all these activities or be opted out, I suggested that students could be opted out of my Chanukah presentation.”

Long stressed that she isn’t trying to push her religion on anyone.

“I am just trying to expose my child’s classmates to different traditions,” she said. Long said the principal agreed to raise the issue again with Poe before rendering a final decision Thursday but suggested that if the school allowed a presentation on Hanukkah, “they would have to teach Kwanza and Diwali.”

But the issue appeared to have been resolved by Wednesday afternoon. Pasco Schools Public Information Officer Stephen Hegarty told Florida Politics that Long could indeed do her Hanukkah presentation once she meets with the teacher and other relevant faculty.

Hegarty confirmed a local TV reporter had also learned of the issue and was seeking answers. He said the district was being cautious when it expressed reticence at Long’s request.

“The Parents’ Bill of Rights is new, and even though it does not affect a lot of things, it affects some things, and everybody wants to make sure they’re doing the right thing,” he said. “They’re trying to be careful.”

He added, “My understanding is the teacher sought clarification from her principal, her principal sought clarification, and that’s where we are right now, which is that she’s going to work through it, make sure it’s all done appropriately, and I expect she’s going to go into the classroom and make a fine presentation. My understanding is she’s done a great job in the past.”

When they talk about Christian nationalism, believe them.

When they talk about religious liberty, see: Christian nationalism. https://t.co/5taIfviEvk

It’s like being gay. MAGAts are worried that one exposure or mention ‘legitimizing’ it will proselytize their kid away from magic Jebus Even Christian bibles mention Judaism.I bet it’ll blow the kiddies’ minds if someone teaches them about atheism.