This is the video that Randy sent me.   It really is important to how deep indoctrination goes and this is what the supporters of DeathSantis want to push in the Florida public schools.   This is what the parents’ rights bill is about, letting these people set the curriculum that kids are taught.  No acceptance or tolerance for gays, trans, anything different from White Straight Christian Male led society will be tolerated in anyway.  ++ Edit.  Any people that are looking for boy lover symbols who have a couple boys are scary as fuck to me.   I had an abused childhood and I did not see that.   These people are looking for it.  I looked (Dogs that love gravy) There is that symbol but because it is so old or well known to law enforcement it is not common anymore, or at least as little as I was willing to go into to it.   If you have the stomach for it, it leads you to outdated sites that can show you new symbols, and takes you farther into the rabbit hole.   It is like porn key word searches, each new refresh or whatever takes you further down the whirlpool.   I am not able or strong enough to do it.  If you are like me, trust me, it is like the world pool that can take my mind, it goes deeper and can get stronger as you go farther into it.  Remember there are things you cannot forget and things you can never lose the feelings of.  I love you all.   Hugs 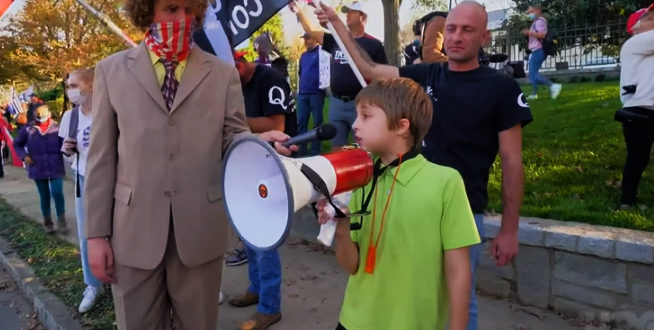 “Biden’s a child molester and he kidnaps children and does horrible things to them just like Hillary Clinton and Obama, who made the virus. The virus is man-made. It doesn’t exist. Kids need to be put back in school.

“The people who are pulling the strings is the Italian Vatican. They actually are reptilian bloodlines from another planet. They’re basically robots.

“Evil people down there such as the Rothschilds, they suck the blood from children to get adrenochrome and stay young and beautiful forever.

“They pick you up and take you in a submarine to Epstein Island, which is where they molest children.”- QAnon grooming victim Jayden, in a scene from The Place Rules, the upcoming HBO documentary.

I have eight nieces and nephews in that exact situation.

Twenty years ago, this would have been considered child abuse. Someone in a state-run agency would have looked at this, realized the danger this would have had on the child, opened up an investigation, and deemed the parents unfit.

To think that now this is commonplace and acceptable in society.

25 years ago my poor cousins, just the girls, were forced to wear culottes for Jesus. They were terrified of the the wrath of God, taught Santa was Satan. No state-run agency was there to help – religious freedom protected their parental right to brainwash their children. There’s nothing different here except that you/we/ some of us disagree.

“They actually are reptilian bloodlines from another planet. They’re basically robots.”

Wait, are they reptiles, reptile hybrids, robots, or cyborgs using reptile or reptile hybrid meat parts? I’m so confused.. sadly, this kid is probably very sure of what he’s saying, since he’s being told that it’s the absolute truth by people he trusts. Probably being told he’s saving people by ‘telling the truth’. No wonder these are the folks scared of education.

They have reptiles on other planets? Do they have fish and amphibians, too? So many questions…

That poor child will be scarred and scared for the rest of their life.

If he ever gets out of the bubble he’s in, he will find out how much he has been lied to, and how much nonsense he has spouted, and hate the people who did this to him. Or he will run back into the bubble, where he’s praised for thinking and saying it.

That shit is wackier than any of the cheap science fiction that I have read.

It’s abhorrent but it’s no different than religious indoctrination forced onto children everywhere.

Governor Abbott would like to interject that the parents are bringing up this child in his “correct” gender.

This type of child abuse has been going on a long time. Marjoe started scream-preaching in the 1940s at the age of 4. In the ’80s, there was this kid:
Does This Child Preacher Understand the Words He’s Yelling?

Glad Bea Arthur passed before all this…

This has been me lately:

17 thoughts on “QAnon Grooming Victim At Center Of HBO Documentary”