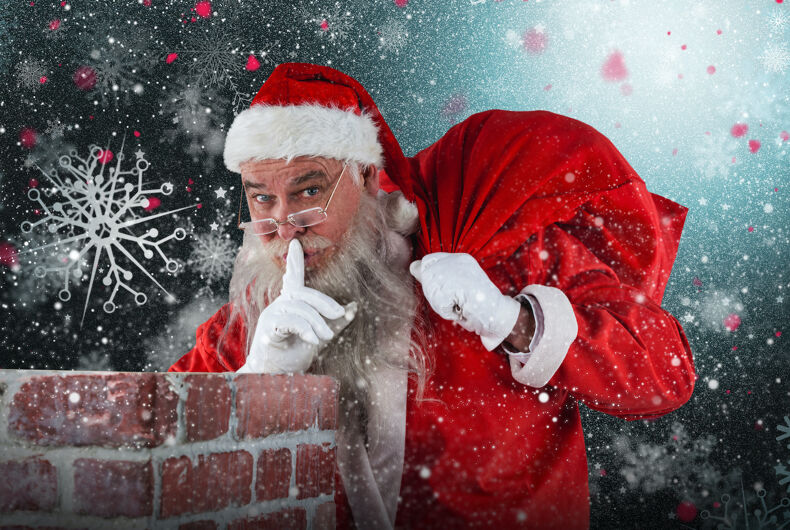 It was one of the most elaborate mid-winter parties in human history. Fragrant boughs of fir trees decked the halls, genitalia-shaped cakes accented banquet tables overflowing with food, and rich slave owners – sometimes tarted up in elaborate drag – served their domestics the best cuts of meat while high on a combination of booze, sex, and gratitude. Social norms were paused for a whole week of December, pranks and taboos prioritized, and all workers given PTO.

It was called Saturnalia, and the church snuffed it out.

But this ancient Pagan festival honoring Saturn, Greek titan of agriculture, and not starving to death, developed beyond being a colorful end-of-the-year bash for Zeus’ Zaddy (according to mythology Saturn, aka Cronus, was father to gods Poseidon, Hades, and Zeus, among others). In the hands of the Romans, the celebration was curated to not only encourage egalitarianism, but also to appreciate working class and enslaved peoples’ contributions to functioning society.

And because all of it was rooted in Greek traditions, Saturnalia was more than a little gay.

I asked Susan Lanigan, anthropologist and bioarchaeologist, to rate how queer Saturnalia was on a scale of Nick Cannon to Harvey Fierstein.

“Somewhere in the Fierstein category, cuddled firmly between Elton John and Liberace,” Lanigan explains without hesitation. “It’s no secret Ancient Greece was super queer, but the Romans were a bit more prudish and often kept queer relationships in the taboo category. However, Saturnalia was all about emulating the social freedom integral to Greek culture. Hence, drag was openly encouraged. We have more than one record from the period describing boys running naked through the streets, men dressed as women, women dressed as men, masters of the house waiting on slaves, and an overabundance of wine, cunnilingus, and fruitcake. In that order.”

The heyday that Lanigan references begins around 133 B.C. Saturnalia did exist before this, but as a shorter, day-long feast on December 25, and with less of the stylized shenanigans which would eventually characterize the festival’s approximate stretch from December 17-23.

If you’ve ever been to a New Orleans Mardi Gras, or celebrated Venetian Carnival, you’re familiar with this socially playful “king for a day” concept, as well as the grace extended to Lords of Misrule for whatever they pulled before everyone sobered up.

Many elements of ancient Saturnalia are still visible in the contemporary West today. Wreaths of evergreen trees, candlelit altars and dinner tables, stacks of gifts, and seasonal songs are just a few. The combination of drag, social inversion, and bawdy jokes are hallmarks of the long holiday tradition of British pantomime pageants, as well as countless TV specials in the USA.

As the 4th century came to a close Saturnalia was systematically replaced with a party for Jesus Christ. Despite evidence that Jesus was actually a Spring baby, it was decided through a combination of politicking and purposeful cultural appropriation – shoehorning pagan traditions into Christianity made the viral religion more appealing to potential converts – that December 25th was henceforth Christ’s birthday.

Christmas rituals began to supplant centuries of Greek-style revelry. Saturnia’s admirable practice of giving working-class people a seat at the table, and repaying the lowest social castes for their struggle with gifts, was diluted over the next several centuries to sung platitudes like “peace on earth, goodwill to men,” which is a nice idea with no assimilable nutritional value.

None of this means modern-day revelers can’t close their calendar year with their own Saturnalia, however. For the sake of not getting arrested some changes to the O.G. itinerary are necessary, but many parts of the ancient festival are still accessible to anyone with a little altruism and/or a decent wig collection.