Can’t have the more popular drag shows cutting into church attendance can we.   Hugs 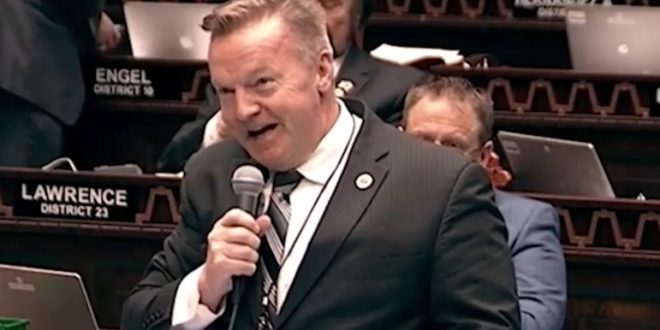 Before the legislative session begins on Monday, three bills have already been introduced by Republican senators aimed at regulating and limiting drag shows in Arizona. The most controversial of the three is a bill that wants stricter regulations on adult drag shows, including limiting the hours they’re allowed to operate.

Introduced by Republican Senator Anthony Kern, SB 1030 specifically calls for regulation and business licenses for drag shows and a limitation of their hours, not allowing shows between 1 a.m. and 8 a.m. Monday-Saturday and prohibiting shows on Sundays from 1 a.m. to 12 p.m. That would impact Sunday morning drag brunches.

Kern last appeared on JMG in August 2022 when he and US Rep. Paul Gosar were ordered to pay a Democratic state lawmaker $75,000 for filing a “lawsuit for the purpose of harassment.” In 2014, Kern was fired from a local police department for lying to superiors. In 2020, Kern joined US Rep. Louie Gohmert in a lawsuit seeking to overturn the Electoral Count Act. Also in 2020, Kern was among the 11 local Republicans who falsely claimed to be Arizona electors. In January 2021, Kern tweeted a video showing himself as present during the attack on the US Capitol. In April 2021, reporters spotted him counting ballots inside the Maricopa County election center, despite rules saying that the counters must be nonpartisan.

Three bills just dropped in Arizona that would define "people dressing opposite of their biological sex at birth and exaggerating their gender" as "adult content."

It says they can only do it in strip clubs, not before noon on Sundays.

It threatens them with criminal records. pic.twitter.com/RVWaL2MQXG

One of the proposals states that nobody can dress opposite of their gender identity and "engage in singing, dancing, or monologuing exaggerating their gender performance" in front of minors pic.twitter.com/fj2zHTnAT1

Another says drag shows can only happen in "adult cabarets" (strip clubs) pic.twitter.com/vKEtijC8ac

Why not on Saturday ?
The Jewish Community hole the Sabbath sacred,- on Saturday.

So more and more they push their fascist agenda. Maybe they’ll call drag performers and the gays ‘degenerates’.
This is exactly what the Nazis did and then packed the degenerates off to the Camps with the Jews.
It’s not so long ago.
I was classed as a criminal in Ireland until 1994.
But then the faeries all came to my rescue.

I don’t do drag, but dressing in drag is ostensibly “speech”, so FOAD

So I guess Harry Styles in a dress is a no no too?

But Catholic priests in dresses are a-ok. For now.

He thinks wearing a suit and tie while attacking people in drag makes him a real man. If he really wanted to outlaw drag, he would outlaw vestments for preachers and robes for judges.

This has nothing to do with Christianity. It has everything to do with a bunch of fascists looking for a group to “other” and allow the general public to hate while the fascists take away everyone’s civil liberties while transferring all economic power to the wealthy elites.

No, it doesn’t, but having read John Boswell’s “Christianity, Social Tolerance, and Homosexuality,” I know that for most of the church’s 2000+ year history there have only been isolated brief pockets of time where some sort of accommodation was made for gay people but mostly it’s been full-on hate for over 2000 years. That’s just a fact.

The fact is that these fascist arseholes know that they can no longer just scream “fa&&ot” and work up a crowd the way they used to, so now they use Trans folks and drag queens and nonsense about grooming to get foolish people riled up. But it is just the same as the old stories from my younger day back in the 50s and 60s when it was how gay people had to recruit new gay people by turning children gay.

“Exaggerating Gender” As Adult Content.
And yet, it’s okay to take the kids to HOOTERS.

But, but, but, that’s good old fashioned Christian Traditional Family Values Cishet type of stuff. You know, stuff that little boys will grow up and ooogle to and little girls will aspire to be.

Not before Sunday, noon!

Does this mean there can’t be a Catholic Mass on Sundays?

Fucking hell, talk about the party of small government, eh?