Every gun owner is a legal gun owner until they are not.    The argument that gun safety laws only punishes the good gun owner trying to protect their home and family.   But the truth is every gun that was in some illegal used started out as a legally bought gun by someone.   Hugs 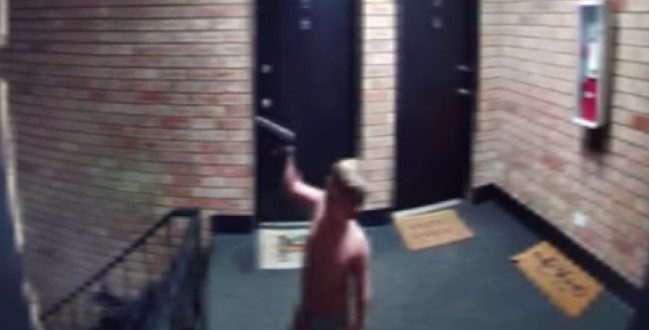 January is not even over, but this weekend’s On Patrol: Live aired what may end up being the most shocking TV moment of the year.

At the beginning of Saturday’s episode of Reelz’s law enforcement docuseries, police in Beech Grove, Ind. responded to reports of a diaper-clad child roaming the halls with a firearm at a local apartment complex.

When the officers arrived, they spoke to neighbors who had reported seeing the toddler with the gun, which he pointed at them, prompting them to retreat inside and call police immediately. The police then questioned the boy’s father, who denied having a gun in the home.

NEW: Neighbors who saw a toddler in diapers wandering around a Beech Grove, Indiana, apartment complex with a loaded handgun called police. The incident was caught on building cameras. The father – who lied that he didn’t own a gun – was arrested. #inlegis https://t.co/FPpHFNi4rn pic.twitter.com/UGic373G4L

Last year – over the objections of police and Hoosiers – Indiana lawmakers passed permitless carry, which allows people to have easy access to guns without a background check or safety training. Data shows the law increases gun crime and death. #inlegis https://t.co/7QEGC3Q4jD

I’ve heard of the infantry but this is ridiculous.

There’s your “Pro-life” at work.

Of course Dad said he didn’t have a gun in the house. His toddler son was walking around outside with it in his hand. /s

Maybe he’s a good toddler with a gun?
Yes, that must be it

He was practicing to stop the mass shooter at the pre-school.

It’s all about the availability of guns.
There’s no other issue.
And for that availability I blame Scalia as much as the NRA.

Shitty parenting all around. That kid is too little to be wandering around outside his apartment without an adult, but is also too big to be wearing diapers. Too lazy to toilet train their kid.

How can anyone with half a brain call this a great country?

I saw this on On Patrol Live on Saturday it was horrific to see this kid walking around pulling the trigger on the gun pointing it at random people, the father was totally responsible and LIED about his access to the weapon, he was arrested for child endangerment and also felon in possession of a gun. Thank god the gun while the clip was loaded there wasn’t a bullet in the chamber so the gun could not fire, if the kid had been able to figure out how to “rack” the gun to load a bullet it would have been much much worse.

He knew he shouldn’t have had the gun, initially when the police asked to search the apartment, he granted them access, but they found the gun inside a closed rolltop desk, which was obviously his attempt to hide it, he didn’t answer the door immediately so the police assumed he was secreting the weapon. He also claimed it belonged to his brother and he sometimes left it there when he didn’t think he should be carrying it around. The police knew it was suspect and kept searching and once they found it, that started the process of identifying him, contacting Child Services and eventually his arrest, the child was turned over to his grandmother who also happened to live in the same apartment complex, but was warned that DCS would be contacting her about the eventual disposition of the child’s welfare.

We were watching it live too and I was pissed off for the neighbors who told the cops what happened only for them to say, “Call us if it happens again since we don’t have proof” and they only stopped halfway out the door because another neighbor came out with their Ring doorbell footage.

Not the only one.