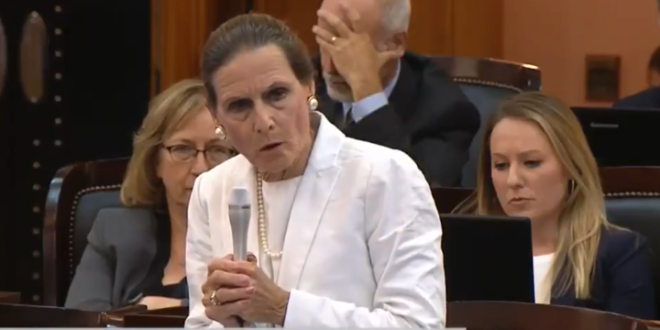 Ohio House Republicans introduced an education bill this week that would prohibit teaching young students about sexual orientation or gender identity, similar to a divisive bill in Florida — dubbed the “Don’t Say Gay” bill — that was signed by the governor in March.

The bill also targets what it calls “divisive” education about race, banning lessons about topics like critical race theory and the New York Times’ “1619 Project.”

The bill, sponsored by Representatives Mike Loychik and Jean Schmidt [photo], would prohibit schools from teaching, using or providing “any curriculum or instructional materials on sexual orientation or gender identity” for students in kindergarten through third grade.

The bill also goes a step further than the recently passed Florida law, forbidding Ohio public school educators in grades 4 through 12 from teaching or using “instructional materials on sexual orientation or gender identity in any manner that is not age-appropriate or developmentally appropriate for students in accordance with state standards.” The drafted bill language does not specify what “age-appropriate” or “developmentally appropriate” material might qualify.

Curriculum about gender identity and sexuality has no place in K-3 classrooms, period.

That’s why I just introduced a bill to ban curriculum about sexuality and gender identity until 3rd grade in Ohio.

Ohio Republicans just introduced their own version of Don’t Say Gay. But this time mixed with a don’t say racism component too.

Homophobia and hate belongs in our history books, not in power.

If you’re a Gen Zer in Ohio and are ready to cause some good trouble, DM me.