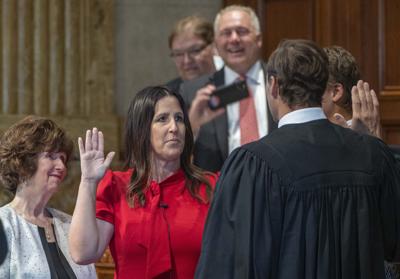 U.S. Rep. Steve Scalise, R-LA, top middle snaps a picture as Rep. Laurie Schlegel, R-Jefferson, red dress hand up, is sworn in at the beginning of legislative House Chamber action Monday May 10, 2021, in Baton Rouge, La.  Photo: Sponsor Rep. Julie Emerson, who sits on the board of trustees for the Southern Baptist Theological Seminary.

The Louisiana House approved Thursday night two anti-abortion bills that restricts access to abortions in preparation for the expected U.S. Supreme Court’s ruling to overturn Roe v. Wade after nearly half a century.

One bill criminalizes selling abortion pills through the mail. The second measure would immediately close all abortion clinics, criminalize most pregnancy termination actions, and send physicians who perform the procedures to prison.

Both bills – Senate Bill 342 and Senate Bill 388 – were passed overwhelmingly by a Louisiana House that rarely has voted against an anti-abortion measure over the years. The legislation now returns across Memorial Hall with requests that the Senate approve of wording added by the House. If both chambers agree before Monday’s adjournment, both bills head to Gov. John Bel Edwards to sign into law or veto.

Louisiana is one of 13 states with legal trigger that go into effect should the high court overturn Roe. A leaked draft opinion suggests that a majority of Supreme Court justices support returning the authority over abortions to individual states.

Senate Bill 342, which was approved 72-25, establishes how Louisiana will operate should that be case.

“It will prohibit abortion in the state of Louisiana,” said state Rep. Julie Emerson, R-Carencro, who was managing the Senate-passed measure sponsored by Sen. Katrina Jackson, D-Monroe, on the House floor.

The measure coordinates and clarifies the 100 or so anti-abortion laws that have been passed during the past 49 years. About 29 definitions were regularized and wording was inserted into about two dozen laws that underscored the Legislature’s intention “to prohibit and restrict abortion.”

In addition to clarifying language, the measure now puts part of the anti-abortion law in the criminal code and levies penalties. But the woman who terminates her pregnancy would not face criminal charges.

A doctor, or anyone else, found guilty of performing an abortion would face prison for not less than one year nor more than 10 years and be fined not less than $10,000 nor more than $100,000. If the abortion is late term, with or without the woman’s consent, the sentences increase to a hard labor prison term of one to 15 years and a $20,000 to $200,000 fine.

Emerson submitted 15-pages of amendments – drafted by Jackson with the help of Louisiana Right to Life – to the seven-page bill. “This amendment is to make as clear as possible what is intended here,” Emerson said.

SB342 would allow abortions removing a fetus that has died in the womb; removing an ectopic pregnancy, in which the egg implants in one of the mother’s fallopian tubes; saving the life of the mother; removal of a fetus that isn’t viable outside the womb or is diagnosed with a chromosomal abnormality.

But there is no exception for rape or incest.

“We’re putting an 11-year-old in the position of having a baby,” said Rep. Aimee Adatto Freeman, D-New Orleans.

Democratic Rep. Cedric Glover, D-Shreveport, attempted to add an exception for rape and incest, but was refused on a vote of 37 to 62.

Senate Bill 388 would clarify criminal penalties for distribution of abortion pills. The House approved that measure 72-24.

With the expected end of most surgical abortions in Louisiana, more women are likely to turn to the two-pill procedure that terminate their pregnancies.

The legislation is needed to address that loophole, said Rep. Laurie Schlegel, the Metairie Republican handling the measure on the House floor for state Sen. Sharon Hewitt, R-Slidell. “The purpose is to stop online, do it yourself abortions,” Schlegel said.

The two pills that can terminate pregnancies are mifepristone, which causes an embryo to detach from the uterine wall and is followed a day or two later with misoprostol that pushes the embryo out of the uterus.

Current law requires a prescription and that the pills are taken under a physician’s supervision. But the pills are legal, easy to find and obtain online. They can be mailed to the homes of anyone who buys them.

“How can the state of Louisiana regulate interstate commerce?” asked Rep. Mandie Landry, referring to trade over state lines, which the U.S. Constitution reserves for the federal government.

“I don’t know how they can stop it unless they’re waiting at the post office,” Landry added.

Schlegel said the sponsor of the measure had checked with prosecutors and was assured that SB388 was constitutional.

The proposal expands the definition for the crime of criminal abortion to include the delivering, dispensing, distributing, or providing a pregnant woman with an abortion-inducing drug when physician is not part of the process.