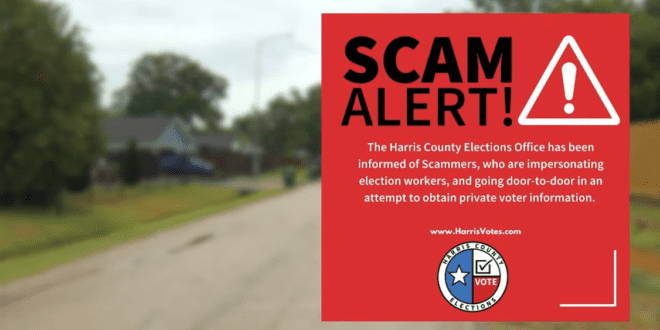 The Harris County Elections Office is warning voters about a new scam targeting private voter information. At least one county commissioner said a group with possible links to the Republican party approached residents living in Sunnyside in order to get their information.

Neighbors in the Sunnyside community were taken back when they learned a group under the name of “ Texas Election Network” could be impersonating election workers and going door-to-door in an attempt to obtain private voter information and sign affidavits.

The men had badges and a clipboard, and officials said they went door to door trying to get voters’ information. The Harris County Republican Party said it’s their understanding the group is a registered non-profit and citizen volunteers.

Read the full article. Per Wikipedia, Sunnyside is a “predominantly” black neighborhood.

He tweeted and dead named Elliot a and when called out for it he refused to delete the tweet saying “I’d rather die than remove it” so Twitter promptly kicked him off.

Today’s “Republican Party” is, in reality, a crime syndicate.

I mean… is this “news” to anyone who’s been paying attention?

The idea is to get the residents to “vote” in ways that don’t actually count, or to discourage them from voting at all. It worked for Republicans in 2016. They have it down to a science now.

At least they caught this one case of dorking around with the voters! How many like this have not been caught? 😦

Even if the affidavits are legit, by mistakenly registering to vote while on probation, black folk could be thrown in prison in Texas.

Once SCOTUS sorts those haves money and haves votes and haves safety from them that have not any of those, America will be just the sort of fan fictions Republicans dream of.

Here is an amazing rundown of SCOTUS’s last session. Scary as all f…
https://youtu.be/4xQUHVxZiyU

They’ve never got used to Black people being allowed to vote. They’ve got a lot of unresolved trauma from the fact that Black people have (in theory) all the same rights as they do economic anxiety