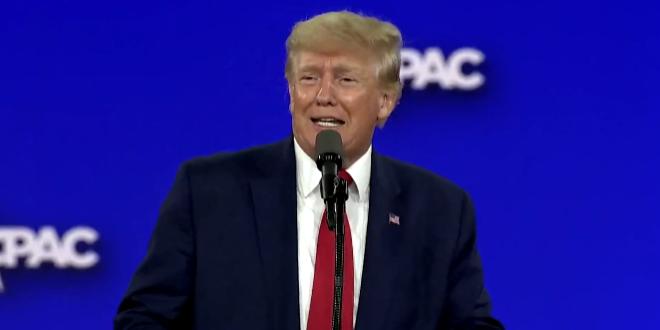 “He the White House doctor. He was a great doctor. You know, he was an admiral, a doctor, and now he’s a congressman. I asked him, ‘Which is the best if you had your choice?’ And he sort of indicated doctor, because he loved looking at my body. It was so strong and powerful.

“But he said I’m the healthiest president that’s ever lived. I was the healthiest. I said ‘I like this guy. I don’t know who the hell he is’ at the time, I said, but I liked him.” – Donald Trump, speaking about Rep. Ronny Jackson during last night’s CPAC speech.

Jackson stood up and took a bow to an ovation.

K Elmquist • a few seconds ago

He’s as delusional as the Emperor was with his new clothes. For every bodies sake, LOCK HIM UP!

He loved his Jabba too!!!

I’m betting either Kennedy (before being murdered, trolls), Obama or Carter were the healthiest presidents in office who ever lived. Maybe Eisenhower, who was just out of the military when elected.

Trump is obese, demented and sadly from a family that is apparently mostly long lived. I hope all the stress of losing the election in 2020 had an effect on him. Stress is a risk factor for many illnesses.

I think that there are times when he is taking the piss, to see how far he can lead his followers into absolute idiocy.

Ronny Jackson knows what Jabba the Hutt’s doctor felt like.

tRump would praise the devil himself if he could get a compliment out of him.

It still hurts to think this jackass was president.

It hurls to think of this jackass as president, with apologies to jackasses.

5 thoughts on “Trump At CPAC: Ronny Jackson Loved Looking At My Body Because It Was So Strong And Powerful [VIDEO]”