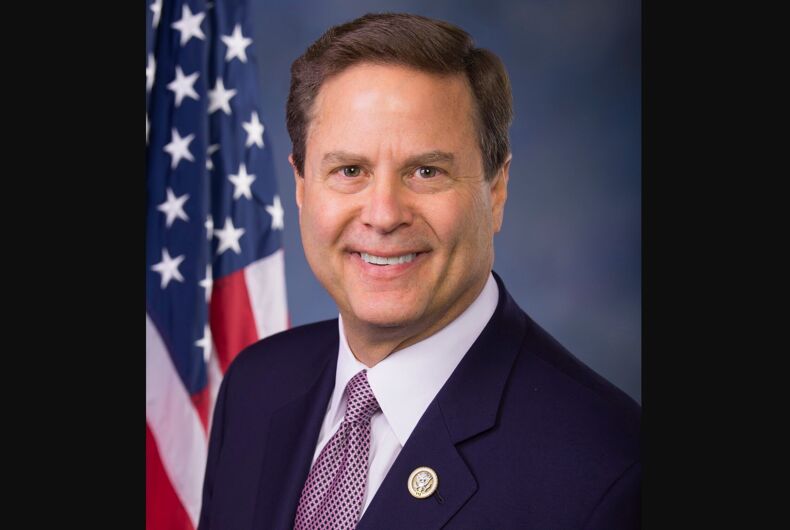 There’s no shortage of media-hungry bigmouths in Congress rights now.  Sadly it’s a feature of American politics and not a bug at this point.

By contrast, Donald Norcross, a fourth-term Congressman, is a blue collar workhorse from Philly’s South Jersey ‘burbs. And that’s precisely why his impassioned stemwinder before a marriage equality vote in Congress stands out. With the Supreme Count poised to reverse their 2015 gay marriage decision, the Democratic-controlled Congress is keen to codify marriage equality into Federal law.

“I woke up this morning, got ready to come over to the Capitol, and as I often do, I glanced over to pictures of my family. And I glanced to a picture of my nine-month-old grandson. Couldn’t be happier about the newest addition to my family. I couldn’t be prouder of the two people who brought him into the world: my daughter Corey and her wife, Hedya. When my daughter told me she wanted to get married, I told her what every good parent should tell her: that if this is the person you want to spend the rest of your life with, I couldn’t be happier for you.”

His voice filled with emotion, he explained how his daughter-in-law’s cancer diagnosis brought a life-and-death urgency to their wedding plans.

“And as I stood at their wedding… I knew it was only made possible because of a recent Supreme Court decision. And today… that same court has opened the door to dismantling families like mine. Splitting this little guy’s family apart, potentially. We can’t let that happen…. I don’t speak about the religious beliefs of my colleagues, but I have to ask: What God would fault in this baby and his two mommies? There is nothing wrong with this. This is pure love. It’s what we all should aspire to. And with that, I encourage my colleagues to vote ‘yes’ so we are equal in all states.”

The legislation passed 267-157, a tally that includes most of the Democratic caucus plus 47 republicans. The bill’s prospects are unclear in the upper house where at least 10 GOP votes are needed to break a Senate filibuster and get the legislation to President Joe Biden’s desk.

And if supporters meet the 60 vote threshold in the Senate, it’ll be thanks to anecdotes like the one Donald Norcross shared on the House floor.

“I’m a rather private person when it comes to the family,” Congressman Norcross told LGBTQ Nation. “But the idea of having some of the statements from the other side of the aisle, what they were saying was just no middle ground. I think it’s incredibly important that people can be who they are.”

Norcross beamed when he mentioned his grandson.

“And he came into this world because of an absolutely wonderful marriage between my daughter and her wife and I spoke from a very real perspective of who they are, and how their life has just grown and blossomed,” Mr. Norcross added.

According to Brielle Winslow-Majette, Deputy Director, Garden State Equality, support for marriage equality is at an all time high because of personal anecdotes like this one.

“Congressman Norcross’s story about his daughter, her wife, and their 9-month-old son is a story millions of Americans across the country share,” Ms. Winslow-Majette told LGBTQ Nation. “Simply put, it is a story about a loving family. Loving someone and building a family with them is all we’re talking about here. I was touched by the Congressman’s story and I hope the commonality of a story that is shared by so many will resonate in the halls of Congress.”

It’s a high bar in the Senator where supporters must flip ten (or more) Republicans to clear the next hurdle.

For his part, Congressman Norcross is already discreetly lobbying members of the Senate to vote YES on marriage equality.

“This is one of those times that I’m going to keep that a little bit quiet,” Mr. Norcross told LGBTQ Nation when queried about who he’s lobbying. “They, depending on what Senator we’re talking about, face different pressures from outside, in addition to their own personal views. And I don’t want to give anybody a reason to go and torque him up or her up, I think we’re going to try to do this just a little bit more quietly, and see where we can go with it and I think it stands a chance.”