A maga trump cult member screamed code words loud enough that it scared companies into to withdrawing their support.    Child drag events are kids dressing up, it is not a sexual thing.    It is not designed to be sexually exciting.   It is designed to be cute, like an early Halloween.    I think of Red Skelton and all the famous performers who wore womans clothing and it was not screamed they were grooming kids.    People who think clothing has a gender need to get over it.   It is a covering that fits over / around the human body and can be as simple as a strip of cloth to as complex as humans can design.   I have always loved this response when this comedian was accused of wearing women’s clothing.  Hugs

“They’re not women’s clothes. They’re my clothes. I bought them.” – Eddie's wisdom via the Beekeepers http://t.co/BFZ9ROWnLG 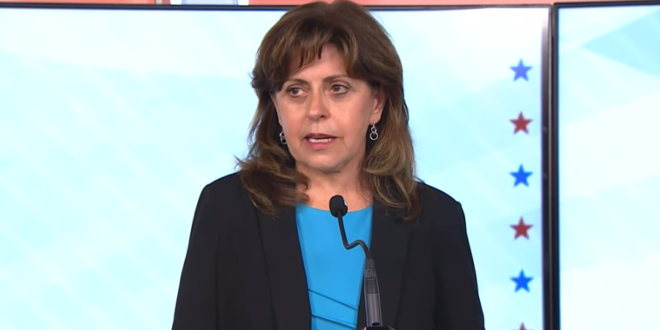 At least three organizations sponsoring weekend’s Boise Pride Festival have decided to withdraw their application after politicians slammed the festival over the inclusion of a “drag kids show” that features children as young as 11.

Zions Bank, Idaho Power, and the Idaho Department of Health and Welfare withdrew their applications as the sponsors of the Boise Pride Festival after Chairwoman of the Idaho Republican Party Dorothy Moon [photo] called out the Democratic Boise Mayor Lauren McLean and urged sponsors to remove their financial support.

Moon called the event an “attack on Idaho’s children.” She also criticized “out-of-state companies” for financing “the sexualization of our children and the perverse idea that children should engage in sexual performances with adult entertainers.”

Three months after more than two dozen members of the Patriot Front — classified as a white nationalist hate group by the Southern Poverty Law Center — were arrested for alleged conspiracy to riot at a Coeur d’ Alene Pride celebration, Idaho’s biggest Pride event will take place in Boise. The Boise Pride Festival, first held in 1989, covers three days this weekend at Cecil D. Andrus Park and downtown, and security measures have been addressed by organizers and police.

Boise Police Department spokesperson Haley Williams said police met with event organizers after the Patriot Front arrests. “As with any special event, the Boise Police Department works with event organizers to evaluate the security needs,” Williams said in an email to the Statesman. “Based on that evaluation and other information, the department makes a plan to staff the event accordingly.”

You’ll be shocked to learn that Dorothy Moon is a far-right election-denying Trump cultist.

As a state rep, she opposed all COVID mitigation attempts and is perhaps best known locally for a bill calling for killing 90% of Idaho’s grey wolves, presumably at the behest of local chicken farmers.

In 2020, she opposed the adoption of new educational standards because she felt environmental lessons were unfair to local logging and mining industries.

Last year, Moon co-hosted a face mask burning ceremony and appeared in a far-right video claiming that the COVID pandemic is fake.

And on a very related note, Moon claims that a childhood vaccine gave her son autism and says that “no Moon will ever take another vaccine.”

Police have also had to increase security measures ahead of this year’s festival after white nationalists attempted to disrupt a pride event in June.https://t.co/tzljn0KoeG

I closed out my account at @WellsFargo. A real inconvenience, especially in a recession. But Americans have long practiced forms of peaceful civil disobedience. We shouldn’t patronize businesses that are committed to undermining our values or that target the innocence of children pic.twitter.com/F926FbWfmZ

Girls and women can wear pants and no one blinks. A boy or man in a dress prompts outrage. Why? Because our society thinks being a woman is less than and a male disgraces himself wanting to dress like a woman.

Why would any woman support this drag hysteria? It’s blatant misogyny.

The far-right fascists are learning ways to cancel the lgbt community. We see it all over the country with books, history, drag shows and even saying the word, “gay.” We better come up with a way to fight back or all our rights will be rolled back.

They are creating a problem only they can fix. I’m not going backwards

I like that the Idaho Democratic Party is calling her out directly for her record of opposition to policies that protect child welfare.

Hey, Dorothy Moon grrrl! I closed my accounts at Wells Fargo, too, about 5 years ago after a well-researched article showed me that they were the financers and #1 beneficiaries of all the companies supporting Trump’s nightmarish white supremacist detention centers that were jailing immigrant children and separating them from their parents.

Glad you agree with me on this one, you ugly treasonous seditionist hag!

This is why I don’t celebrate when corporations do Pride month stuff.
Because when push comes to shove, they will show more often then not they’re cowards.

Zions Bank, Idaho Power, and the Idaho Department of Health and Welfare

The surprise isn’t that they pulled out, the surprise is that they were ever in. Two Idaho state agencies, and a bank that’s majority owned by Mormons?

The threats are working…. pride being canceled in multiple placea….. fear of violence….

Well I remember the 70s and early 80s when the threat of violence was a daily occurance for walking the street.

Canceling is letting them win.

Sponsors that fold bees to be called out.

“no Moon will ever take another vaccine.”