Pure Christian hate, myths, and lies.   This is a popular member of the republican party and she represents all that the right is.   But for all her talk of god, her husband exposed himself to a couple teenage girls before she married him, recently there was a 911 call where her drunk husband was driving over a neighbor’s mailbox and threatening them because they asked his out of control teenage son to slow down on the residential street with kids.  The caller said that the Boebert’s were always drunk and causing trouble in the area, thugs who felt they were above the laws and better than anyone else because she is in congress.  Hugs 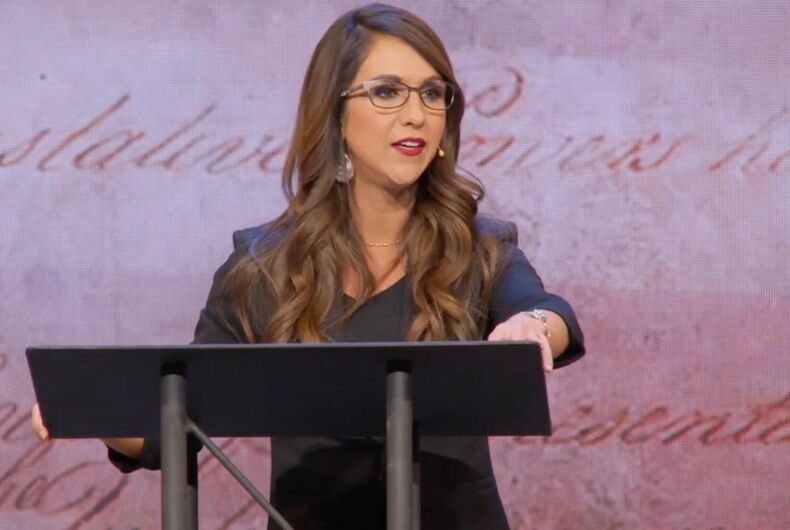 Anti-LGBTQ Christian nationalist Rep. Lauren Boebert (R-CO) recently gave a speech telling Christians to “rise up” and put “God back at the center of our country.” She also said that LGBTQ people have created a national “identity crisis” for children and families by “spitting in God’s face” and perverting his creation.

Boebert made her comments last weekend at the three-day conference hosted by Truth and Liberty Coalition, a Christian nationalist organization that believes the U.S. must be a rigidly Christian nation. The organization was founded by far-right preacher Andrew Wommack, and the event was hosted at Wommack’s Charis Bible College in Woodland Park, Colorado.

“We need God back at the center of our country,” Boebert said in her speech. “It’s time for us to position ourselves, and rise up, and take our place in Christ, and influence this nation as we were called to do…. We know that we are in the last of the last days…. It’s a time to know that you were called to be a part of these last days. You get to have a role in ushering in the second coming of Jesus. Pretty cool, huh?”

During her speech, Boebert said that after God created the world, “It wasn’t long before [the people] were living in a pigpen smeared with filthy, filthy inside and out.”

“Refusing to know God, they soon didn’t know how to be human either,” she said, adding, “Furries,” to audience chuckles.

Later on in the speech, she specifically slammed trans people.

“And for the record,” she added, “men, please stop trying to chest feed or figure it out so we can get this baby formula shortage under control. If they could figure that out, we might be all right. Or just, men, stop getting pregnant. Gosh, they keep inventing new ways of wrecking lives. There is a feminine product shortage because they’re all in the men’s bathrooms.”

“Your identity is connected to your destiny, and that’s another attack right now: an attack on our people and attack on our children,” she said. “There is an identity crisis that has been created. God wants you to know who you are. The enemy perverts everything that God has done. Everything that God intends for you and your life and your children and your children’s children, the enemy will take that and twist it however he can. I think when we have a large portion of the population who can’t tell us what a woman is, there’s a crisis.”

“And it’s not as if they don’t know better,” Boebert continued. “They aren’t ignorant regarding these things. They know exactly what they’re doing. They know perfectly well. They’re spitting in God’s face and they don’t care…. They know what’s right. They know the difference. They know what a boy is and what a girl is, but they’ve been deceived. Dark darkness will cover the earth and deep darkness the people, but the Lord will rise over you and His glory will be seen upon you.”

“God is on our side. The blood has been applied,” she added. “We are going straight into victory. You are all more than conquerers through God, through Christ who strengthens you every step of the way.”

Boebert also claimed that a father in Michigan told her that his son got into trouble when he stepped on the tail of a student who identified as a furry. Her story is an extension of a right-wing lie about schools recognizing furries as a gender identity. In reality, such stories are meant to bias people against people who identify as transgender.

Wommack believes that Christians should have control over non-believers through the “seven mountains” of influence: religion, family, education, government, media, arts and entertainment, and business, Colorado News Online reported.