Haircuts.   This hater is accusing a hospital system of being groomers of sexual abuse of children for helping kids with hair styling tips.   This shows it is not about the kids, it is not about saving kids from abuse, it is about forcing kids to fit into a traditional stereotype gender role established by religion.  Somehow this is fits with her accusation that children in the US are getting sexual reassignment surgery, which is not true at all.  Hugs 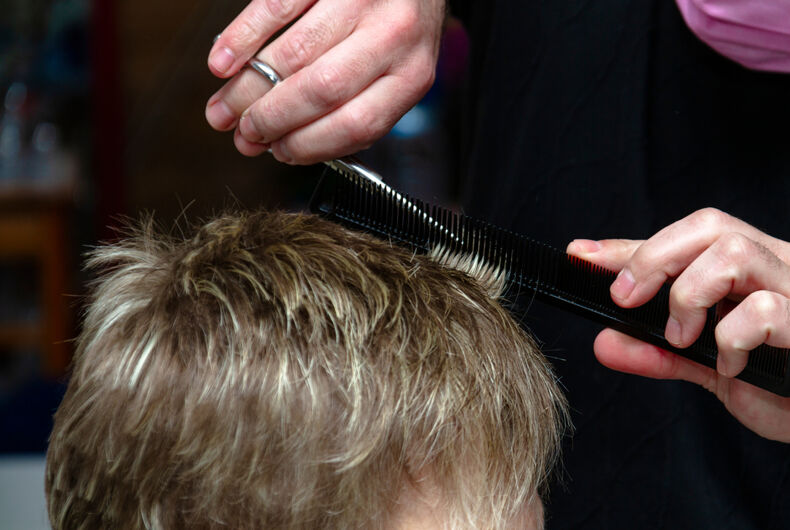 Anti-LGBTQ activist Chaya Raichik – who goes by “LibsofTikTok” on social media – is upset that transgender kids are getting access to haircuts.

On her Substack that she has been promoting since her social media accounts started getting suspended, Raichik shared an invitation to a gender-affirming workshop being run by Kaiser that says several times that it’s for “kids and their parents or guardians.”

“Kaiser Permanente, one of the nation’s largest health care organizations, is promoting gender-affirming programming to minor patients without the knowledge or consent of parents, a mother told Libs of TikTok in an exclusive interview,” Raichik wrote, describing the workshop as a “series of courses on social gender transitions.”

The few that deal with transitioning don’t mention surgery at all; one is about vocal exploration, another about clothing, and one is about “gender congruent hair styling.”

Raichik said that she was forwarded the message by a mother who isn’t supportive of her child’s identity and who “feels like her child is ‘becoming a guinea pig’ at the hands of medical organizations” because of the possibility of Zoom workshops about haircuts.

In the comments on Raichik’s Substack, people referred to Kaiser as “groomers,” a term used to describe child sex abusers and that Raichik popularized using to refer to any discussion of LGBTQ people in the presence of teens and children.

“Libs of TikTok’s Substack is now going after the Kaiser hospital system for such unspeakable acts as… holding a workshop on haircuts,” wrote Media Matters LGBTQ Program Director Ari Drennen on Twitter. “This panic is about punishing ALL gender nonconformity, period.”

Libs of TikTok's substack is now going after the Kaiser hospital system for such unspeakable acts as … holding a workshop on haircuts.

This panic is about punishing ALL gender nonconformity, period. pic.twitter.com/Trq4ITsklV

Harvard Law School instructor Alejandra Caraballo said that it was a “straight up lie” that Kaiser was going behind the backs of parents since the workshops include parents.

It's such a lazy and obvious lie – what 12-17 year old is in touch with a health insurance company without their parents' knowledge?

Last month Raichik made headlines when she falsely claimed online that a 16-year-old transgender boy would be able to get a hysterectomy at Children’s National Hospital in Washington, D.C. Her story was picked up by other conservative media even though the hospital said that they wouldn’t perform such surgery and the World Professional Association for Transgender Health (WPATH) only recommends gender affirming surgery for people who are of the age of consent and after a 12-month period where they live as their real gender.

While her accusations were incorrect, the hospital received bomb and death threats from her followers.

Earlier in August, Raichik reposted about 13 tweets and a right-wing “expose” claiming that the Boston Children’s Hospital in Massachusetts was conducting gender-affirming surgery on children as young as two or three years old.

The fact-checking site PolitiFact later debunked the claims, but physicians at the hospitals received so many death threats, harassing calls, and emails that the hospital had to hire extra security and give doctors new guidance on responding to threats.

The hospital’s website says that surgery recipients must be at least 18 years old and have a “persistent, well-documented gender dysphoria.”

When she’s not claiming that children’s hospitals are performing gender-affirming surgery on transgender toddlers, Raichik mostly shares videos of LGBTQ teachers and makes negative comments about them, even if it’s not clear that the teachers are doing anything wrong. In the responses, her followers call the teachers “groomers” and claim that they’re harming children with their LGBTQ identities.