Racist much?   Oh yes this is a completely racist screed.   I lost count of the lies and misinformation trying to create the impression that all your problems are the fault of those bad brown people coming into the country.   But Tucker loves him white Europeans especially those fascist white ethnostate ones that say no mixing of the races allowed like Viktor Orbán.  Hugs 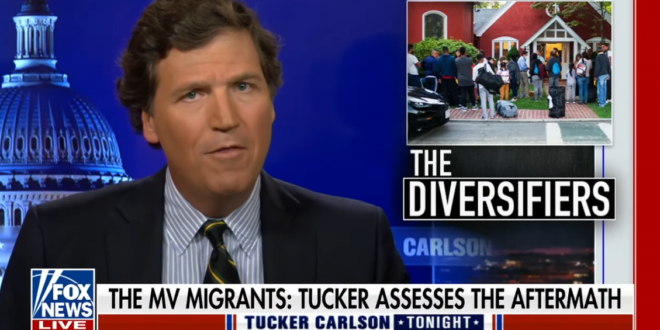 “When government officials send you the blessed gift of diverse immigrants or refugees, you must accept. That’s the rule.

“It doesn’t matter how disruptive these new people are. It’s irrelevant how much they cost to support or how dramatically your quality of life may decline after they arrive.

“It doesn’t matter if the crime rate spikes, if your daughter is afraid to go outside, if the schools become unusable, the hospitals fall apart. It doesn’t matter, you never complain. You take it like a man.

“You don’t even mention that it’s happening, even in private text messages to your friends. If you do, you’re a dangerous racist. You could wind up on a government list.

“That’s how America works. Everybody knows it because it’s been going on for a very long time. That’s the rule.” – Tucker Carlson, last night.

Nope….your daughter is why immigrants are afraid.

Wow. They’re following their orange Hitler’s lead and goin’ for the gold. No more “finessing.” Just say it. Say what the base wants to hear.

One of these days, Carlson or Trump will slip and say the “N” word on air.

Serene Pumpkin another_steve • an hour ago

It won’t be a “slip.” It will be carefully calculated in order to foment a violent reaction, which will then be exploited in turn.

Expect this to get dialed up in the next month and a half in order to try and make white women forget about Dobbs.

It needs to be repeated —because these horrible racist nazi fuckwads like Donald Trump and Tucker Carlson and Laura Ingraham never stop repeating their lies— that this whole thing has been thoroughly debunked and it is well documented that immigrants commit crimes in much lower proportions than native-born American citizens do.

I am confused….. I thought our daughters were afraid of trans people in the bathroom. Or black people. Or drag queens. It is tough being paranoid