This is a political talking point maneuver.   It won’t become law as longs the Democrats stay in charge.   Should the republicans win any or all branches of government they will try to make it the law.   Notice they again equate drag queens reading stories as a sexual event.   The bill says sexual orientated material by which they want to target books with LGBTQ+ characters or story lines.   But it also means everything.   Last I checked if a book with a gay character is sexually oriented then so is a book with straight characters.   If gay is sexual so is straight, if same sex marriage / couples are sexual then so is opposite sex couples.   This is what the right seems to forget is kids see gender all around them in every person / couple they see.   Hugs 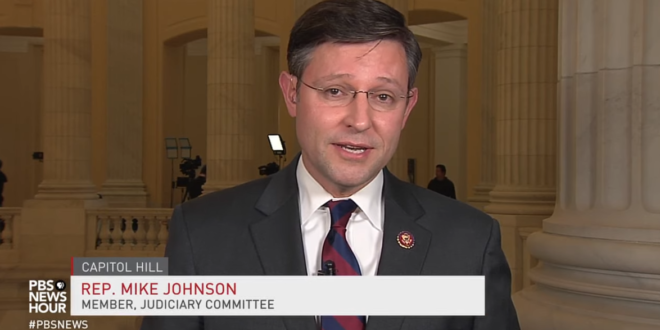 More than 30 House Republicans have signed on to a bill to prohibit federal dollars from being used to make “sexually-oriented” materials available to children under the age of 10.

The measure introduced Tuesday by Rep. Mike Johnson (R-La.) would prohibit the use of federal funds to develop and host programs or events for children younger than 10 that contain “sexually-oriented material,” such as drag queen story hours that have recently drawn the ire of conservative politicians and right-wing groups.

Johnson’s bill, titled the “Stop the Sexualization of Children Act,” claims that state and federal agencies including the Department of Defense have in the past used federal funds to promote and host “sexually-oriented events” like drag queen story hours or burlesque shows for children and families.

In 2015 as a Louisiana state rep, Johnson introduced an ultimately failed anti-marriage equality bill patterned after Indiana’s infamous and similarly failed bill. In 2018, Johnson joined with anti-LGBTQ evangelical Kirk Cameron in an attempt to allow Christian prayer in Louisiana’s public schools. Johnson is a freshman in the US House.

Universities, public schools, hospitals, medical clinics, etc. could all be defunded if they host any event discussing LGBTQ people and children could be present. The way they define "sexually oriented material" simply includes anything about LGBTQ people.

It includes a private right of action against any government official AND private entity for a violation. This is SB8 style bounty lawsuits against anyone accepting federal funds. This will be a ban on all discussion of LGBTQ people in any entity that received federal funds. pic.twitter.com/ABndE60wxV

This is the American version of Russia's gay propaganda law passed in 2013. This is their end game. To censor and ban LGBTQ from all public life and force them back into the closet.

The pretext in this bill is clear. They will troll the media about the bill being about "stripping" or drag queen story hour. In reality, the way the law is defined, it could apply to a school that has a screening of Buzz Lightyear.

I can't overstate how radical the private right of action portion is. The bill is so broadly defined that a pediatric hospital could be sued for having a pride flag or a medical pamphlet about gender dysphoria. It deputizes anti-LGBTQ bigots to engage in bounty lawsuits.

As we've seen with SB8, the lawsuits are rarely actually filed. Simply the threat of litigation is enough to create a chilling effect. Any federally funded entity will remove all references to LGBTQ people as a precaution, just as schools in Florida have done.

The press don’t bother to point out that ‘sexually-oriented material’ just means ‘acknowledgement of the existence of people who aren’t cis-het.’ Because that would be editorialising.

“any topic involving gender identity, gender dysphoria, transgenderism, sexual orientation, or related subjects” It sure will be fun learning which “related subjects” to our existence will be criminalized.
Not to worry, the media will breathlessly cover the “controversy”.

Nic Peterson heleninedinburgh • an hour ago

It also allows that the fascists are the ones with rights to bestow upon others.

Thank you. The way they word it makes it sound like school libraries have back issue of Hustler Magazine on the shelves. smdh

should be shot down easily this time. foreshadowing of what these ghouls will do if they take the house.

It amazes me that this is a focus for them. Meanwhile, they are against lowering drug prices, trying to stop inflation, helping veterans, etc. They just want to stir up their base voters with this type of rhetoric.

How are Drag Queens any different than any other entertainer that dresses up for an act?
Ban the characters at Disney World and in Times Square.
Let’s just ban the Arts and Entertainment.