This is a direct result of the attacks on drag queens by republicans and the right wing media.   These are legal venues, this is the action of thugs, vigilantes enforcing the republican talking points via terror and intimidation.   This is a crime.  “Nice business you have here be a shame if something happened to it if you do something we don’t like”.   These maga gang thugs don’t care about the laws, they think what they want is above laws.   They don’t like democracy because the majority doesn’t like their bullshit, so they want to rule as a minority by threats and violence.    Hugs 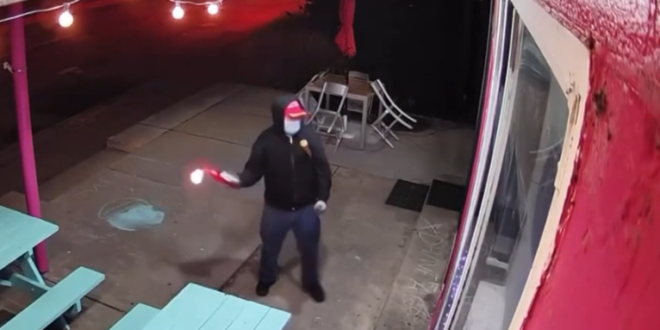 Tulsa Fire investigators are looking for a person of interest after someone smashed a window at a Brookside donut shop and threw a Molotov cocktail inside. This is the second time the business has been vandalized in the past two weeks.

The owners of The Donut Hole near 31st and Peoria said they were out of town when they got the devastating call that their business had been targeted again.

Investigators said the person first puts a letter with anti-LGBTQ rhetoric on the door of a neighboring business, then uses a bat to smash through the glass door. Once it was broken, the person is seen throwing the explosive device inside.

From the store’s Facebook page after the first attack:

We had the privilege of being able to be a part of the vision of The Queens Dirty Dozen; An art installation donut shop run by drag queens.

The event was an enormous success with over 500 guests attending, and an overwhelming reaction of laughing, jokes, fun and good times were had by all.

Unfortunately, there was also a reaction of hate and we were the victim of somebodies malicious acts. But in ones attempt to rain on our parade, the community answered by showing overwhelming support.

From the GoFundMe that was started by Queens Dirty Dozen, goals were surpassed in less than one hour.

Repairs will be made and all extra proceeds will be given to the Tulsa Equality Center to help spread acceptance, tolerance and love.

These malicious acts have resulted in thousands of dollars going towards the cause this entire event was meant to support. Love wins.

The GoFundMe drive has been restarted.

In the video report above, they say the fire department is investigating a “person of interest.” So we’ll likely have his name pretty soon.

It’ll emerge that his dog sitter’s niece’s godmother’s piano teacher’s boyfriend’s grandfather’s neighbor once displayed a Pride flag, so the fascists will of course proclaim that he is a BLM antifa Commie.

I’m guessing his social media posts will show him to be a Trumper.

I’m very familiar with the area. There are many businesses I’m sure they can check their security cameras as he left the area. Hopefully it will catch him getting into a particular vehicle.

someone smashed a window at a Brookside donut shop and threw a Molotov cocktail inside. This is the second time the business has been vandalized in the past two weeks.

So terrorism is reduced to vandalism when it’s committed by fascists. Got it!

My point here is that our brave, truth-seeking, completely objective and unbiased MSM characterizes serious attacks on our side as “vandalism”, whereas a bunch of people peacefully protesting SCOTUS justices who are dismantling our civil rights are committing “terrorism”.

Drag Queens making and serving donuts. How mortifying. I am so happy that all of OK’s other problems have been solves so they can focus on this.

How toxic is one’s masculinity if they’re threatened by drag queen donuts? Seriously, that’s effed up.

“But crime only happens in blue states!”

It’s apparently not a serious crime when progressives are the target — note that the news story states that the business was “vandalized” as opposed to being the target of terrorism.

NPR and other outlets have had pieces on the “creation of the enemy as Antifa and Radical Left” turns out the actual numbers and origins of incidents don’t point to any left wing folk.. not to any degree at all.. wow, Nov. elections are here and important..

Bear in mind that to them this is no crime.

The anti Fetterman ads running in Pennsylvania say crime is running rampant across the state. I have not heard of one piece of legislation from our Republican legislature to combat this, but, apparently it’s Fetterman’s fault.

I can’t believe I’m saying this, but at the gubernatorial level Oklahoma may be blue this time around. The race is tied and the sheer hatred and assholism of Kevin Stitt has united all kinds of people in opposition, including many Native American tribes. Fingers crossed!

Something to cheer us up.

That’s a courageous preacher who tells the truth. Good for him. I just sent his church a donation to thank them for his and the congregation’s courage to speak up for rationality, compassion, and the truth. I encourage others to donate, too.

The hypocrisy of using Leviticus for queer-bashing while eating shrimp and catfish and lobster – true!
“We all got to look at ourselves” – true!!
“We all need Jesus” – debatable.