Again gang thugs.   Funny white supremacy and Nazis do not bother the republicans and churches but peaceful creative dress up does.   But I see that these thugs are not getting the big crowds and backing they used to get, I think the good people are pushing back against this rule by gang violence.     Hugs 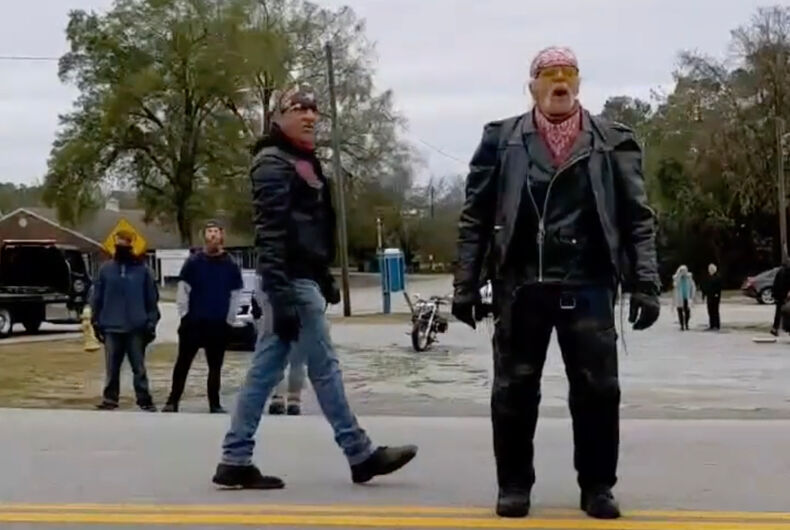 A drag brunch in Chattanooga, Tennessee drew protest Sunday, in a scene that has become all too common over the past year.

The crowd of about 30 people outside the Seed Theater was reportedly organized by Chattanooga-based right-wing group Tennessee Neighbors for Liberty. But, as the Chattanooga Times Free Press reports, in photos and videos posted to social media, several protesters can be seen carrying flags bearing the logo of white supremacist group Patriot Front.

In one video, a protester appears to throw a Nazi salute and shout “white power.”

Protesters chanted slogans like “strong families, strong nation,” and “reclaim America,” and held signs saying “stop the abuse of children,” “groom dogs not children,” “cross-dressing is an abomination to the Lord,” and “You do not know what love is.”

They were met, however, by a group of counter-protesters, which was reportedly slightly larger, holding Pride flags and chanting “love will win.”

Police were present at the protest, but no incidents were reported, according to a Chattanooga Police Department spokesperson.

Elizabeth and Brenton Haley started the Seed Theater earlier this year to give LGBTQ people like their 15-year-old transgender son a place to feel safe.

“That’s what we hear more than anything from parents, especially for teachers and young people in those important formative years, they don’t have places their kids can go to,” Elizabeth Haley explained. “Having a safe space their children can come and experience community is really important.”

Sunday’s drag brunch, which was billed as an all-ages event, was the second show at the Seed Theater to draw protests. But Haley said that the backlash has actually led to an increase in support and donations to the theater.

“It’s been really great for our community, as difficult as it is,” she said. “It’s very clear that we have a strong and healthy presence of LGBTQ people and allies here in Chattanooga.”

Haley said that Sunday’s drag brunch sold out all 80 tickets.

Earlier this month, Tennessee Republicans introduced a bill that would ban any “adult cabaret performance” — including “topless dancers, go-go dancers, exotic dancers, strippers, male or female impersonators who provide entertainment that appeals to a prurient interest” — on public property within view of anyone who is not an adult.