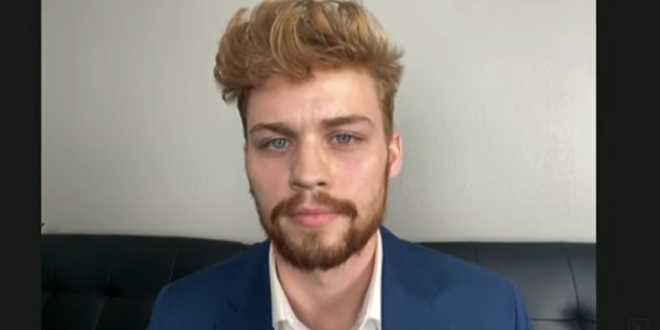 A local venue in the Deco District of San Antonio has been forced to cancel future drag shows planned at the space after far right social media accounts spread a false narrative over Twitter. Starlighter said in a statement on Sunday, December 4, that they were made to feel unsafe after being threatened online in comments and other tweets.

The threats stem from a far right “independent journalist” named Tayler Hansen [photo], who posted video on Twitter of a Christmas drag event for all ages at Starlighter on Friday, December 2. Starlighter says in the statement that the child was never left unattended or was in any danger.

They were the child of a food vendor that was right outside the door of the venue. The child was familiar with both the Starlighter staff and queens and the vendor later posted a photo thanking the queens for treating their child like “a niece.”

Hansen attended the attack on the US Capitol and took video which he claims proves that Ashli Babbitt was innocent. It doesn’t appear that Hansen has been charged for being part of the mob of insurrectionists. He was arrested last month for disrupting a speech by John Bolton.

The Starlighter Instagram advertises “All Ages” Drag Shows consistently, this is not the first time they have hosted a show like this.

Another “All Ages” Drag Show is being hosted on the 4th of December.

The only time their shows are 18+ is when something TV-MA is screened. pic.twitter.com/cQ6GERvgRd

And churches. At least there would be some truth in advertising.

I’m tired of being pushed around.

When do we stop caving in and start defending our spaces?

I understand that we need to protect people from terrorists. But as long as we keep backing down, they have a winning strategy to stop us from having drag events… just threaten violence, no one actually ever gets arrested, and we’re fucked.

The show must go on! If things like this are cancelled, the bigots win!

Come on 3 letter agencies. It’s beyond time to crack down on this domestic terrorism.

I’m ready to start a movement where children can’t go to church until they’re age appropriate.