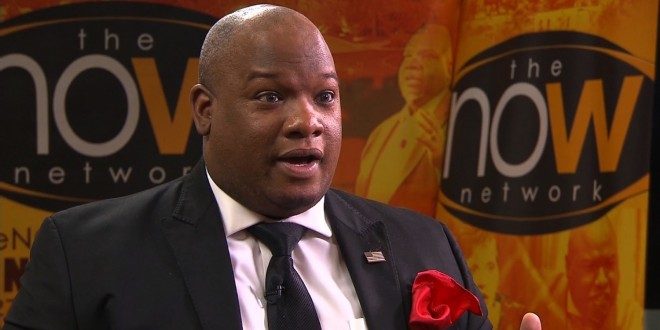 Burns spoke at the ReAwaken America rally in Keizer, Oregon, last weekend, where event organizers claimed that “antifa” protestors outside the event were placing sharp objects under the wheels of attendee’s cars in an effort to pop their tires. While at the event, Burns sat down for an interview on “The Black Conservative Preacher” show, where he insisted that Christians should not turn the other cheek, as Jesus commanded, but rather strike back twice as hard.

“You see an antifa flag, knock out their window,” Burns advocated.

“Forgive me, Jesus,” he then added, facetiously. “Lord, forgive me. I’m asking for forgiveness right now.”

“The Bible says that ‘the Kingdom suffers violence and the violent take it by force,’” Burns declared, quoting Matthew 11. “The problem is we’re being too cowardly and too weak and we think that man has authority over us when we serve a big God who has given us power and authority to tread over every demonic spirit. So, if they’re gonna knock out a window, you go knock out two of theirs.”

“Y’all better go buy some swords in the name of Jesus,” Burns proclaimed. “Go start knocking out some windows!”

Realizing that he may have gone too far, Burns then attempted to backtrack, insisting that he was not advocating violence but was simply promoting “self-defense.”

“I’m only saying that if they’re going to knock out our windows, we’d knock out theirs too,” he said. “They believe that we Republicans are soft and we are quiet and we are cowering down to antifa and Black Lives Matter. The devil is a liar. Don’t let my title [of pastor] confuse you. I’ve been waiting for antifa!  …  I’m here, come get me. That’s my mentality. Come get me. Want some? Get some.”

“I will Will Smith them in a heartbeat,” Burns pledged. “I’ll put one of them to sleep.”

Can someone tell me what the Antifa flag looks like?   Antifa is not an organization, it has no flag nor members.   I suspect he was really meaning the Pride flag and was really preaching to assault any LGBTQ+ they come near.    Afterall everyone knows that they are the enforcers against things god hates.