I watched the interview in real time.   The host kept cutting him off.   She did not want him to point out it was a deliberate attempt to sabotage the Biden term and she tried to stop Sanders from talking about how Manchin rakes in big money from donors to deny the public any benefits.   Sanders explained how Manchin’s game is to draw everything out then kill it then let it start to repeat his prior actions.   draw it out and delay anything getting done.   He also explained that Manchin is not serious about cutting inflation just using it as a scare word because plans developed that he kills have all had things to cut inflation.   I am not sure if is is all money or if Manchin thinks he should be president or what, but he really wants to take down Biden and the Democrats.   I suspect it is because of the attempt to hold his daughter accountable for the horrific increase in price of the EpiPen when it shouldn’t have needed to be increased at all.   Hugs 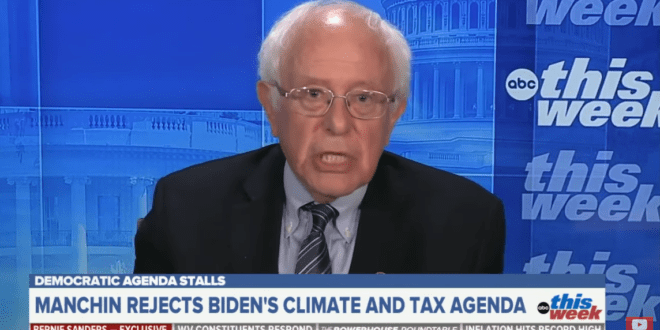 “He has sabotaged the president’s agenda. No, look, if you check the record, six months ago, I made it clear that you have people like Manchin – Sinema to a lesser degree – who are intentionally sabotaging the president’s agenda, what the American people want, what a majority of us in the Democratic Caucus want.

“Nothing new about this. And the problem was that we continue to talk to Manchin like he was serious. He was not. This is a guy who is a major recipient of fossil fuel money, a guy who has received campaign contributions from 25 Republican billionaires.

“In my humble opinion, Manchin represents the very wealthiest people in this country, not working families in West Virginia or America.” – Sen. Bernie Sanders, this morning on ABC This Week.

I don’t think it takes a lot of deep thinking to see that Bernie is right about Manchin. He claims to be working towards a compromise but never gets there. We need a ton of blue votes in the midterms to override him, and then kick him to the curb.

Manchin is the Lucy to Biden’s Charlie Brown

And if after last summer (when he knew Manchin’s bottom line)…Schumer is either clueless or impotent as majority leader. Or both. Same damn pattern …every time.

Ton more blue votes
Hold him close.
Keep your enemies closer.
We will need him at some point
You just know if the left had 59 senators, the right would find a way to trick the left to go back and add the filibuster.