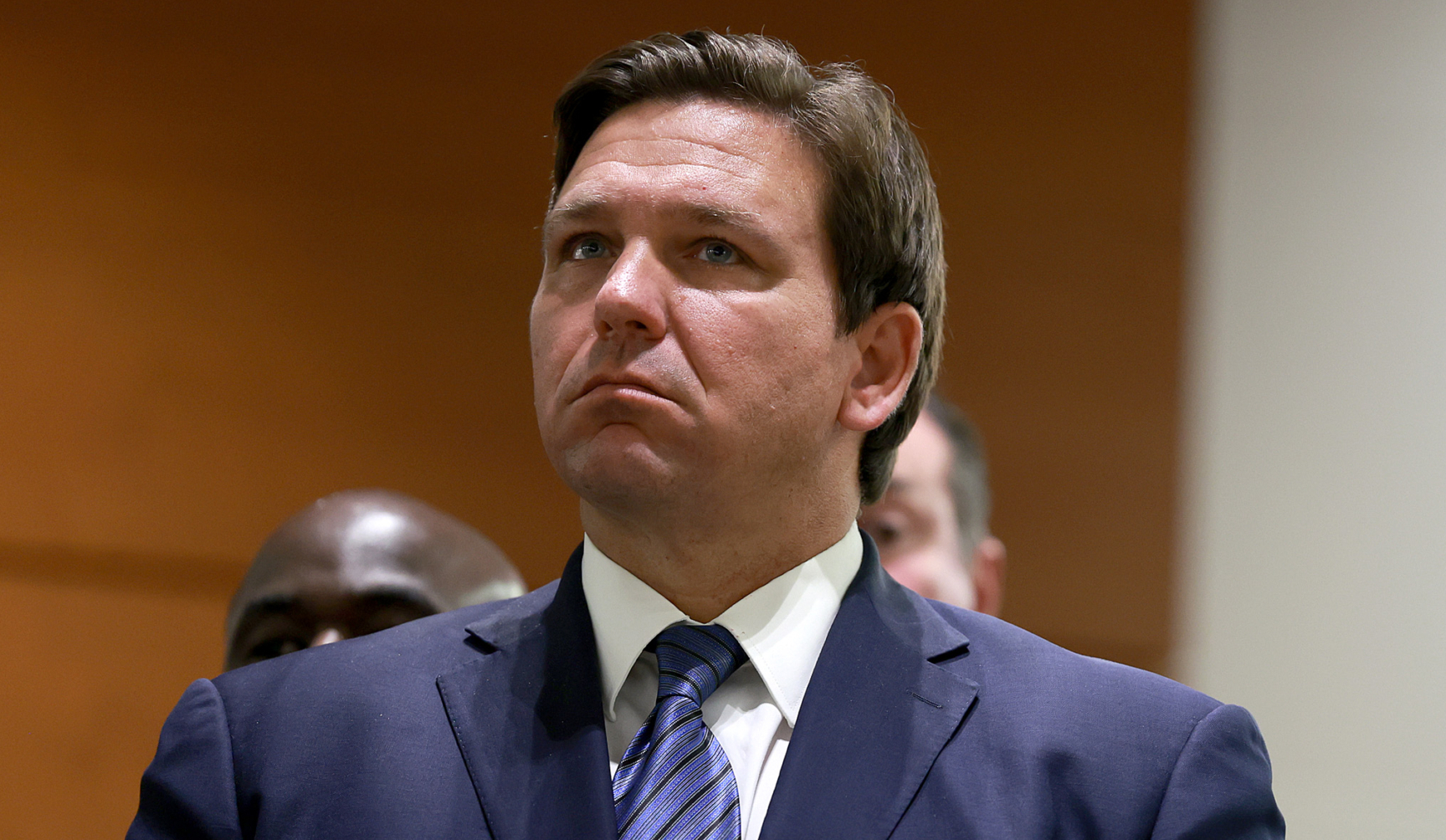 From curricula to library books to teachers themselves, queer expression and education in U.S. public schools are being slowly but surely outlawed. One of the most severe cases of this degeneration of rights is in Florida under the rule of perennial mess Ron DeSantis.

This week, he doubled down on his disdain for LGBTQ+ education of any sort, referring to its inclusion as “indoctrination” and “a political agenda”.

This latest denouncement came after being asked why his administration had rejected the curriculum for an advanced placement African American Studies course.

The offending material? A section on “queer theory”:

When asked about the AP African American studies course that was banned in Florida, Ron DeSantis goes in a homophobic rant that includes railing against intersectionality while doing his best Trump impression. This is about banning ideas he doesn’t like, plain and simple. pic.twitter.com/3PCVwctHPY

“This course on Black History, what’s one of the lessons about? Queer theory!” he exclaims. “Queer theory” is the widely accepted academic name for the field of LGBTQ+ studies, so the way he managed to make it still sound like a slur is kind of amazing.

His next question to the room proved his lack of understanding of both Black and LGBTQ+ people, ignoring the existence of a whole category of humans in one sentence:

“Now who would say that an important part of Black History is ‘queer theory’?” he asks incredulously.

Let’s think for a moment! Would Martin Luther King Jr.’s close advisor Bayard Rustin say so? How about women like Ma Rainey and Bessie Smith who helped create the genre of blues music? Do James Baldwin and Audre Lorde not exist in Black History to Florida?

This examination of the intersection of identities and how they interplay in culture and history is exactly the kind of knowledge DeSantis and co. want to keep from the nation’s youth.

“That is somebody pushing an agenda on our kids,” he rails. “When you look to see they have stuff about intersectionality, abolishing prisons — that’s a political agenda. That’s the wrong side of the line for Florida standards.”

Discussing Black history without discussing the way Black people continue to be disproportionately incarcerated seems to also be a big no-no to the governor. Makes sense coming from the governor of the state with the third highest number of inmates in the country.

Related: After being cucked by Ron DeSantis on a world stage, Trump turns his ire toward Melania and Dr. Oz

“When you try to use Black history to shoehorn in queer theory,” he continues, “you are clearly trying to use that for political purposes.”

Throughout all this attempting to cover up historical figures and contributions, he firmly asserts that he’s still here for “cut-and-dry history”.

“You learn all the basics, you learn about the great figures,” he contradicts. “I view it as American history. I don’t view it as separate history. We have history of a lot of different shapes and sizes.”

He closes by very vaguely advocating for the teaching of  “people that have participated to make the country great and people that have stood up when it wasn’t easy.” The unabridged facts of who stood up and against what aren’t as important to him as making sure the LGBTQ+ community isn’t among them.

Several anti-LGBTQ+ laws are being passed or proposed across the US as political attacks against the communities continue.

In North Dakota, conservative lawmakers have introduced at least eight laws targeting LGBTQ+ communities, many of which target transgender people.

One bill, rejected on Friday, mandated people affiliated with schools or institutions receiving public funding having to pay a $1,500 fine for using gender pronouns other than those assigned at birth for themselves or others, the Grand Forks Herald reported.

Many in the state’s senate judiciary committee that voted down the bill noted that they agreed with the bill’s intention to limit transgender rights, but they felt that the bill was poorly written and difficult to enforce, according to ABC News.

Christina Sambor of the North Dakota Human Rights Coalition testified against the bill on Wednesday, noting that “its very purpose is gender-based discrimination”, ABC reported.

In a separate proposal, Republicans lawmakers introduced a bill to ban “sexually explicit” materials from libraries, with possible jail time for librarians that do not comply.

Under house bill 1205, public libraries could no longer provide books on a range of topics, including any on “sexual identity”, and/or “gender identity”, the LGBTQ+ magazine Them reported.

North Dakota has long been problematic to LGBTQ+ communities. The state was among the last to recognize same-sex marriage.

In the US, several states have filed over 100 laws targeting LGBTQ+ rights, NBC News reported. Such bills have targeted almost all aspects of life, ranging from sports to healthcare to education.

Texas has filed the most anti-LGBTQ+ laws, a total of 36. Missouri has introduced or passed 26 bills, followed by North Dakota, and Oklahoma with six.

West Virginia lawmakers advanced a bill last Thursday that would ban doctors from performing gender-affirmative surgery on transgender youth, a proposal that many in the medical community and advocates have decried as transphobic and unnecessary.

“This doesn’t help anybody,” the Democratic representative Mike Pushkin said to West Virginia’s state house health and human resources committee. “This is just an insult to people who are already marginalized.”

Florida has initiated a number of anti-LGBTQ+ laws since the passage of what has been coined as the “Don’t Say Gay” bill, which bans instruction on sexual orientation and gender identity in kindergarten through third grade.

His office has not elaborated on what will be done with the collected data but noted that it was for “governing institutional resources and protecting the public interest”.

Republican lawmakers have also taken actions to crack down on drag shows.

Lawmakers in at least eight states have taken steps to either restrict or ban drag shows, with at least 14 states introducing such bills.

Drag show performances across the country have faced increasing violence from anti-drag protests. In December, an anti-drag protest with 500 participants targeted a public library in the Queens borough where drag queens were reading books to children, NBC News reported.

Cities in Illinois and California reported protests, with participants shouting homophobic and transphobic slurs at drag queens participating in similar story times, according to the Associated Press.

This is what DeathSantis and the republicans in the state want.   They want to remove gays from the state.   They want a white straight ethnostate.  They want a maga paradise.   The don’t say gay bills are not about instructing sexuality or gender identity it is about denying such things exist.    Nan has asked if Ron and I would move out of Florida and the answer is yes we have talked about it for the last few years.   As Florida has become more and more maga and intolerant we have talked about or options.   Hugs

New research on LGBTQ parents in Florida found that a majority of those surveyed considered leaving the state over its controversial law restricting classroom instruction on LGBTQ issues before the fourth grade.

Nearly six out of 10 parents surveyed by the Williams Institute said that the enacting of the legislation commonly known as “Don’t Say Gay” led them to consider moving to a different state — while 17% have already taken steps to do so.

The research — released Tuesday by The Williams Institute at UCLA School of Law, a think tank that focuses on LGBTQ law and policy — also found that 11% of surveyed parents considered moving their child to a different school.

Analyzing data from 113 LGBTQ parents in the state, researchers found that nearly nine out of ten of them said that they were concerned about the effects of the legislation on their families and children.

More than half of LGBTQ+ parents surveyed for our new study have considered moving out of Florida because of the “Don’t Say Gay” law – and 17% have taken steps to do so. https://t.co/DClPKBZNK6 @ClarkUniversity pic.twitter.com/l0gvK7SMIb

They expressed concerns that the law would restrict them from speaking freely about their families, and as a result, it would affect their children’s sense of self and sense of safety and also create a hostile school climate.

“Legislation can have a negative impact on LGBTQ+ parent families by cultivating a climate of fear and insecurity,” said study author Abbie E. Goldberg, a professor of psychology at Clark University.

“For LGBTQ+ parents without the means to move or send their children to private schools, the stress that this legislation creates will be significant,” Goldberg added.

Surveyed parents reported that their children had already experienced a variety of consequences from the bill — including bullying and harassment because of their parents’ LGBTQ identities, fears about continuing to live in the state, and no longer having the ability to talk about their parents’ or their own LGBTQ identity at school.

“The Don’t Say Gay bill claims to be for parent rights, but my rights have been taken away since its passage,” one parent said. “My right to send my daughter to school freely, my right to live without fear of who I am, my right to not be discriminated against based on my sexual orientation, and my daughter to not be discriminated against based on her parents’ sexual orientation.”

Slammed by critics as “hateful,” “homophobic” and “transphobic,” HB 1557 was signed into law nearly a year ago by the state’s Republican Gov. Ron DeSantis.

The much-publicized enacting of the legislation — a victory for conservatives in the state — sparked a dramatic increase in anti-LGBTQ vitriol on social media, as well as in-person protests against LGBTQ youth events in the state.